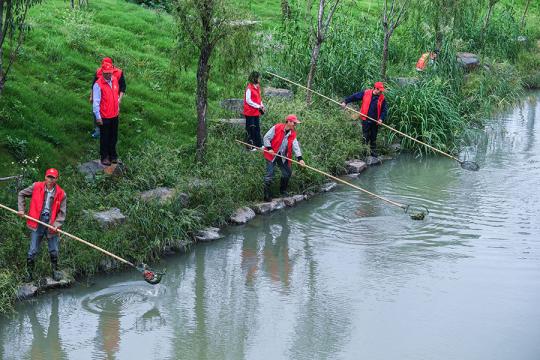 Prosecutors should step up efforts to file lawsuits to stop individuals or groups that are in the early shapes of destroying the ecology and environment, legal experts said.

They said that prosecutors have made strides in suing polluters after damage has occurred, but the procuratorial organs still have a long way to go when it comes to taking preventive action.

Dimitri de Boer, chief representative of the China office of ClinetEarth, a European environmental law group, said that it would be better to take legal action before the pollution or damage to nature occurs.

He made the remarks at a recent meeting during an international seminar on judicial protection of biodiversity in Kunming, Yunnan province.

"Now in China, prosecutors usually initiate public interest litigation against polluters after environmental authorities learn about the pollution," he said. "However, it is kind of late by then. Through preventive public interest litigation, they can stop pollution before damage occurs if they have evidence that a project like road or power station construction may pose a threat to the environment," he said.

"Preventive public interest litigation is important to environmental and biodiversity protection. The legal system is common and has been widely adopted across the world, and it still needs more promotion in China," he added.

Wu Kaijie, a law school lecturer at Peking University, said preventive litigation cannot only lessen pollution's impact on the ecology and environment but also put the brakes on unnecessary investment.

"For example, a wind power station may be dismantled due to environmental problems, which wastes lots of money," Wu said. "A project like this may cost hundreds of millions of yuan but has to be halted in the middle of construction after it is found to be located inside a nature reserve by environmental inspection teams from the central government.

"This kind of situation happens because some local governments are not able to properly conduct environmental impact assessments, and as a result they easily give approval to those construction projects, usually for a good GDP number. Prosecutors need to supervise, learn the risks and stop such projects as early as the assessment procedure through preventive public interest litigation."

In 2017, China's top legislature revised both the civil and the administrative procedure laws. Since then, procuratorial organs have been able to initiate public interest litigations, namely for the protection of public interests like the environment, public safety and State-owned assets. Before the revision, initiators were individuals or NGOs.

According to the Supreme People's Procuratorate, from July 2017 through September, procuratorial organs nationwide filed 118,012 public interest litigation cases in ecological and environmental protection, accounting for 55 percent of all such cases.

In these cases, they urged polluters to treat 214,000 hectares of polluted and damaged farmland, wetland, forestland and grassland and helped recover 3.45 billion yuan ($490 million) for ecological restoration and environmental treatment.