Schoolteacher misconduct to be punished 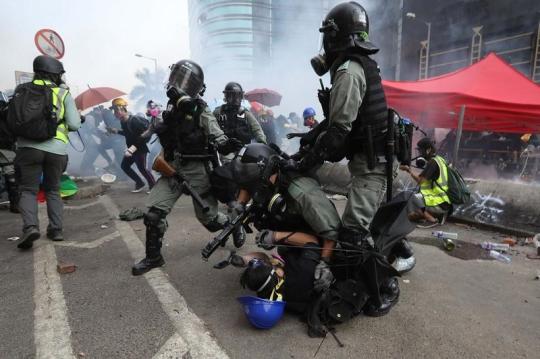 Hong Kong teachers convicted of breaking the law may have their teaching licenses revoked by education authorities. That may affect those arrested during the six months of sometimes violent protests, Education Secretary Kevin Yeung Yun-hung said on Wednesday.

Yeung told reporters that the Education Bureau takes allegations of teacher misconduct very seriously and, when warranted, will take disciplinary action, including warnings, reprimands and deregistration of teaching credentials.

The bureau has finished evaluating 60 of the 106 complaints against teachers and schools received between mid-June and early November. After preliminary investigations, 30 teachers were found to have breached professional codes under the special administrative region's Education Ordinance, Yeung said. Disciplinary actions are being considered, he said.

"We will consider the background of the case and what actually happened," Yeung said. "Then we will decide whether there was misconduct on the teacher's part."

Under professional guidelines, a teacher who is arrested or charged should report the incident to the school, which decides whether the teacher may remain in the classroom, Yeung said. Officials weigh cases considering the influence on the safety of students.

The bureau has asked a school in Sheung Shui to consider suspending a teacher who was arrested with six students on Monday morning, Yeung said.

The seven were among the 12 arrested on suspicion of attempting to use homemade barricades ahead of a planned citywide traffic disruption on Monday. The 31-year-old teacher and two of the students appeared in Fanling Magistrates' Court on Wednesday morning. No pleas were entered.

Also on Tuesday, three suspects, including a 16-year-old girl, appeared in West Kowloon Magistrates' Courts regarding their alleged roles in a riot on Hong Kong Island in late July, the first rioting case filed during the unrest. The other two were a newlywed couple. Their case is set for another court hearing on March 6. They were among the 44 charged with rioting on July 28 in Central. Two have fled to Taiwan, officials said.

Tang Fei, principal of Tseung Kwan O Heung To Secondary School, said that to protect students, the Education Bureau should revoke the licenses of teachers found guilty by courts of criminal offenses. The danger, he said, is that those teachers may push underage students to become involved in violence.

Lawmaker Elizabeth Quat Pui-fan said the bureau should also investigate teachers accused of disseminating hatred or enticing students to join unlawful assemblies or violent protests. Parents are increasingly worried about teachers having a negative influence, Quat said, in light of the participation of many underage students in violent protests.

On Tuesday, Hong Kong Chief Executive Carrie Lam Cheng Yuet-ngor also expressed concern about the potential for violence to spread to the city's schools, in light of teacher arrests and the discovery of two homemade bombs at a secondary school in Wan Chai on Monday.

Lam had asked the Education Bureau to closely follow teachers' cases, given that 40 percent of the more than 6,000 arrested during unrest are students.

During and after radical protesters' occupation of The Hong Kong Polytechnic University, more than 1,100 people were arrested or had their information collected by the police, including 300 under age of 18, and only a small minority were PolyU students, officials said.

On Wednesday, PolyU campus partially reopened after being ravaged by protest violence.