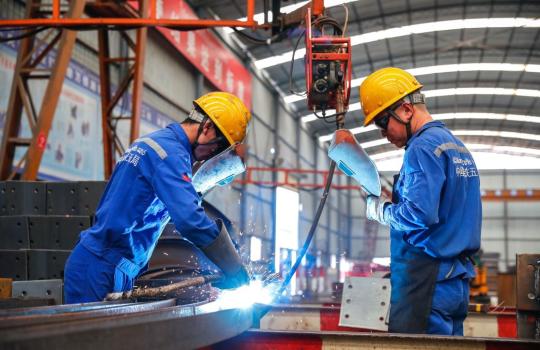 Economic and trade cooperation between China and related economies under the Belt and Road Initiative has flourished over the past six years, boosting China's highlevel opening-up and further opening up of the global economy, according to senior commerce ministry officials.

Qian Keming, vice-minister of commerce, said the BRI has made significant contributions to the global economy and humanity development, and has been receiving positive responses from an increasing number of countries and international organizations.

"Based on the principle of achieving shared growth through dialogue and collaboration, BRI upholds the 'Silk Road spirit' of peace, cooperation, openness, inclusiveness, mutual learning and mutual benefit," Qian said.

"It has created a new space for the world economy, built a new platform for international trade and investment, raised up new practices in global economic governance, made new contributions to the well-being of people in the world, and contributed China's wisdom for building a community with a shared future for humanity."

Chu Shijia, director-general of the comprehensive department at the commerce ministry, said trade between China and the BRI economies has been expanding, with two-way investments increasing and key projects progressing. And establishment of overseas economic and trade cooperation zones have accelerated, and cooperation mechanism enhanced.

Currently, China has inked 198 cooperation documents with 167 countries and international organizations under the BRI and established working relations with seven countries on unimpeded trade and with 44 countries on bilateral investment cooperation, to quickly resolve the problems in bilateral economic and trade cooperation.

Economic and trade cooperation has been a cornerstone of the BRI with data from the past six years proving the success of the mechanism, said Chu.

Latest data from the General Administration of Customs showed that the growth in China's trade with the BRI economies was higher than the overall growth during the first 11 months this year, as imports and exports with the BRI-related economies reached 8.35 trillion yuan ($1.19 trillion), up 9.9 percent year-on-year, and accounting for 29.3 percent of China's total foreign trade.

The cumulative trade volume between China and BRI economies has exceeded $7.5 trillion and China is the largest trading partner for 25 of these economies, Chu said.

The accumulated investment of Chinese enterprises in BRI-related areas stood at $110 billion, with the value of newly signed overseas contracted projects exceeding $750 billion.

Key projects involving construction and operation of ports, railways, highways, and bridges among many other projects along the Belt and Road area have also been making achievements as expected.

The protocol of the second phase of China-Pakistan Free Trade Agreement also came into effect this year, and 15 member countries of the Regional Comprehensive Economic Partnership also have accomplished conclusion of negotiations as a whole.

Both of the officials made the remarks at a book release function in Beijing last week. The book－A Bright Shared Future ... Stories Along the Belt and Road－is the first in a series of stories related to the Belt and Road Initiative. The book has been compiled by the Chinese Academy of International Trade and Economic Cooperation of the Ministry of Commerce and a second volume will be launched soon.