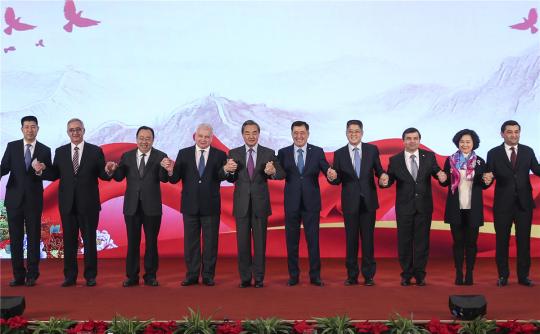 State Councilor and Foreign Minister Wang Yi (fifth from left) holds hands with diplomats from countries in Europe and Central Asia during a reception in Beijing on Nov 29, 2019. [Photo by WANG ZHUANGFEI/CHINA DAILY]

Wang: Nations that have faced similar woes can be of great help to each other

Some Western forces, including the United States, are using issues related to the Hong Kong Special Administrative Region and the Xinjiang Uygur autonomous region to brutally interfere in China's domestic affairs, Wang said at a Beijing reception attended by diplomats from the countries.

He also said some countries in Europe and Central Asia have had to contend with chaotic situations and "color revolutions" that have attempted to use democracy and human rights as justifications, he said.

As a result, China and those nations should further strengthen mutual political trust and support each other in safeguarding their sovereignty, security and development interests, as well as supporting each other in exploring development paths that suit their own conditions, Wang said.

China and European and Central Asian nations should act against the threats posed by unilateralism and bullying, "stand on the right side of history", and firmly maintain the international system centered on the United Nations and international order based on international law, Wang said.

The nations should consolidate their confidence in cooperation, filter all disturbances from the outside world and continue to cooperate effectively on building the Belt and Road, Wang said. He called for joint efforts to maintain peace and stability in the region as well as in Eurasia as a whole.

Speaking of relations between China and the European and Central Asian countries, Wang said they have become trusting friends and partners in win-win cooperation, and they always have been important for China's diplomacy.

China and these countries have supported each other in international affairs and have made important contributions to regional peace, stability and prosperity, he said.