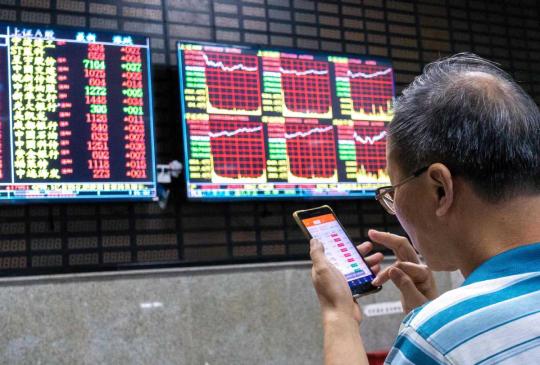 An investor monitors stock prices on his phone at a stock brokerage in Shanghai. (Photo by Lyu Liang/For China Daily)

The acceleration of Chinese stocks' integration into the global market will draw more foreign capital inflows into the country's A-share market, which will help boost investor sentiment and improve market liquidity and structure as the country's regulators continue to push capital market reform and opening-up, analysts said on Monday.

One positive development is the inclusion of additional A-shares into the MSCI indexes, which will officially occur after the closing bell on Tuesday. The latest expansion of the MSCI representation will mean that more than 200 A-shares will be added to the MSCI China Index and the inclusion factor for the existing constituents will be increased from 15 percent to 20 percent.

The representation of China's A-shares will rise to 12.1 percent and 4.1 percent in the MSCI China and MSCI Emerging Markets Indexes, respectively, after the adjustment.

The immediate benefit will be more capital inflows as the latest round of increased weighting of A-shares in the MSCI indexes is expected to attract as much as 300 billion yuan ($42.7 billion) of foreign capital into the onshore market, according to estimates by China International Capital Corp.

Prices of good-quality blue chip stocks and companies that are industry leaders with attractive valuations will get a boost as foreign investors tend to favor equities in China's more promising sectors such as technology, healthcare, chemicals and consumption-related areas, analysts at Huatai Securities said in research note.

The longer-term benefits of the A-shares' MSCI inclusion will be deeper market liquidity, greater accessibility of Chinese stocks for global funds as well as improved investor structure. The A-share market will be more driven by professional investors who look at the fundamental value of listed companies rather than behaviors of retail investors who tend to be easily more influenced by short-term market swings, analysts said.

"Chinese equity markets will become a more attractive option for international investors as they have a lower-than-average allocation on China. Their holding of China's equities, compared with their overall portfolio, is far less than the share of China's economy in the world," said Chen Jiahe, chief investment officer at Novem Arcae Technologies, a wealth management firm in Beijing.

"While the global market is filled with cheap money due to negative interest rates, the valuations of many equity markets are not that cheap. However, ideal valuations can still be found in China, especially Chinese blue chip companies, among which valuations are still far below the average level of the global market," Chen said.

The proportion of foreign investors' holdings of A-shares has been steadily rising along with the acceleration of the opening of the Chinese capital market. Foreign investors currently own about 3 percent of the total capitalization of the A-share market.

While China will likely see slower growth and uncertainties as China-United States trade negotiations still linger, global investors remain upbeat about prospects of the A-share market and the possibility of gaining sound equity returns in the coming year.

Equity strategists at Goldman Sachs forecast a robust outlook for Chinese companies in 2020 despite the country's slower GDP growth. Profits of A-share listed companies have expanded by 8 percent in the first nine months of this year driven by factors including industry consolidation, tax cuts and fee reductions by the government as well as a stable property market, they said.

The US investment bank expects the CSI 300 Index, a gauge that tracks 300 major listed companies in Shanghai and Shenzhen, to reach 4,200 points by the end of 2020. It said that it will stay strategically positive on Chinese sectors including 5G, retail, and pharmaceuticals in the coming year.

Further foreign capital inflows induced by the MSCI inclusion will depend on whether more market reform breakthroughs can materialize, analysts said.

Wang Delun, an analyst at Industrial Securities, said Chinese regulators need to address remaining restrictions in derivative trading and a lack of hedging tools for foreign investors to facilitate further inclusion of A-shares into the MSCI indexes in 2020.

The China Securities Regulatory Commission is planning to relax trading rules for foreign investors and to expand their investment scope by allowing them to trade derivatives such as financial and commodities futures and options. The regulator is expected to finalize the rules by the end of this year.