Zhu Ting returns to China ahead of 2020 Tokyo Olympics 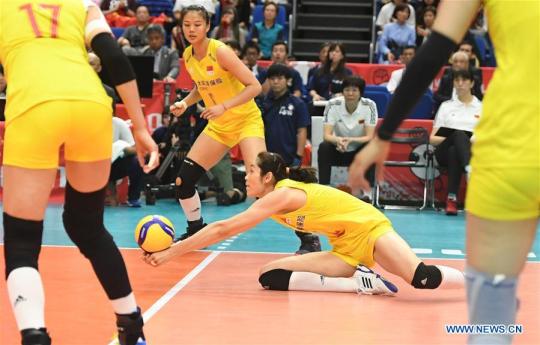 Zhu Ting of China saves the ball during the Round Robin match between China and Japan at the 2019 FIVB Women's World Cup in Yokohama, Japan, Sept 19, 2019. [Photo/Xinhua]

Zhu Ting, captain of China's women's volleyball team, says she decided to return to China's Women's Volleyball Super League and sign for Tianjin in order to be fully prepared for the upcoming 2020 Tokyo Olympics.

"The overseas volleyball season lasted a long time, which left a short period for me to train with the national team. So I chose to come back to China and devote myself to my country," Zhu said in an exclusive interview with Xinhua.

China's women's volleyball team attended the 70th anniversary of the founding of the People's Republic of China after returning to Beijing on October 1, an experience Zhu says was unforgettable for her and her teammates.

"We wore our gold medals there and were very excited when the aircraft flew over Tiananmen Square. I got up early that day, but did not feel tired until noon," Zhu said.

Zhu led China to win gold with a perfect 11-0 record at the 2019 FIVB Volleyball Women's World Cup, also securing their place at the 2020 Tokyo Olympics.

"Everything went smoothly as my teammates played well and we did our utmost to win. It was easier than four years ago," Zhu said, before cautioning that the side may still meet more challenges in Tokyo and that the team still has room for improvement.

China beat Serbia to claim gold in the women's volleyball at the 2016 Rio Olympics, where Zhu was named Most Valuable Player.

"I have a good understanding with many players in this club since we have been training with the national team for a long time. This can improve the national team's preparations for the Tokyo Olympics," Zhu said.

Having played with Turkish club VakifBank Istanbul for three years, Zhu believes the high quality of matches in Europe helped her to improve. "I played a number of important games in Turkey, and I gained a lot of experience and improved my decision-making ability."

The skipper's overseas experience also broadened her cultural horizons. "It will benefit me all through my life. If there is an opportunity, I will join another overseas club in the future," she added.