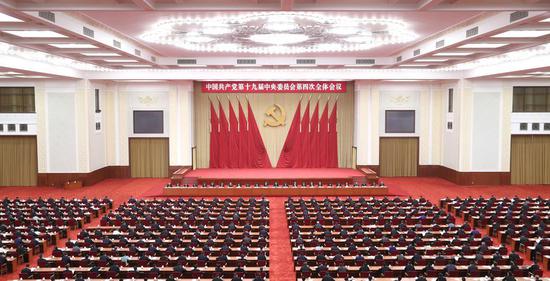 The fourth plenary session of the 19th Communist Party of China (CPC) Central Committee is held in Beijing from Oct 28 to 31, 2019. [Photo/Xinhua]

China will focus on leveraging its institutional advantage and creating a more consistent and institutionalized rule of law to upgrade its growth model and build a high-standard and open economic system. It's a focus that became more clear after a recently concluded key Party meeting laid out the goal of modernizing the country's socialist market economy and its economic governance capacity, experts said.

The Fourth Plenary Session of the 19th Communist Party of China Central Committee held last month sent a clear and strong message from the central leadership that building systems and institutions has been the key to the country's economic success, they said. Building such systems will continue to be the cornerstone and a critically important factor that matters for China's future development, given that the country's growth is seeing rising headwinds, they added.

The comments came as China's economic activity softened in October. Industrial and investment growth as well as retail sales all registered a slower pace of growth and the consumer price index, a main gauge of inflation, rose 3.8 percent year-on-year on surging pork prices. Still, a positive factor is that China continued to see strong capital inflow in October, with foreign direct investment rising 7.4 percent year-on-year to 69.2 billion yuan ($9.87 billion).

Xu Hongcai, deputy director of the Economic Policy Commission at China Association of Policy Science, said a significant portion of the Party meeting's communique was devoted to the idea of optimizing government functions and responsibilities in economic regulation, market supervision, social management and public service. That is the core of modernizing the country's governance and achieving the goal of deepening reform and ensuring stable and high-quality growth, he said.

"China has been exploring the relationship between government and market by carrying out a series of pilot reforms," Xu said.

"The Party meeting acknowledged the advantage of China's socialist market economy system, which is to let the market play the decisive role while emphasizing the positive roles of the government and public sector," he said.

"The goal is to further utilize the institutional advantage to build a fair, competitive and efficient market governed by rule of law and a service-oriented and clean government, which is key to ensuring sustainable and high-quality economic growth," he added.

Also for the first time, the meeting called for optimizing the economic governance database to improve the government's decision-making process.

"The database can help provide a richer and more accurate reference for economic governance, helping guide market expectations and promoting a more efficient allocation of resources, which will allow market players to make better business and operational decisions," Li Chao, an analyst at Huatai Securities, said in a research note.

Improving the governance system to unleash the country's technological and innovative strength is another important goal laid out by the leadership in the meeting's statement. For instance, the meeting called for efforts to build a new national system to push technological progress and breakthroughs.

"This is in line with the country's goal of developing an innovation-driven economy. We can expect a greater role for government in nurturing technological development and more investment from both public and private sectors in basic scientific research. This is also crucial for China to build a modern and advanced manufacturing industry, especially against the backdrop of the country's growing frictions with the United States," Xu said.

"Supply-side structural reform remains the focus. The key is to open up and improve the resource markets, as well as to effectively protect all kinds of property rights, especially intellectual property rights, so as to accelerate the formation of a high-standard market system outlined by the fourth plenary session," Liu said.

Modernizing the economic system to facilitate higher-level opening and better integration with the global economy is also underscored by the statement of the fourth plenary session. For example, the meeting decided to promote better international coordination in drafting macroeconomic policies, improve the negative-list management system for foreign investment and accelerate the development of free trade zones and ports.

Zhang Bin, director of the Global Macroeconomy Research Division at the Institute of World Economics and Politics, a research institution, called for efforts to improve the socialist market economy in terms of ensuring fair competition and the free flow of resources.

The fourth plenary session has pledged reforms to better ensure fair competition between domestic and overseas companies and fully implement the negative lists for market access while pushing further and comprehensive opening of services, manufacturing and agricultural sectors to foreign businesses.

"Great growth potential lies in consumption upgrades, as people's demand for services of a wider range and higher quality continuously rise," said Zhang, who is also a senior researcher at China Finance 40 Forum, a think tank.

To realize that potential, the government could further lower the barriers faced by private and foreign capital to access some service industries — such as medical care, education and cultural industries — leveling the playing field of various types of enterprises, Zhang said.