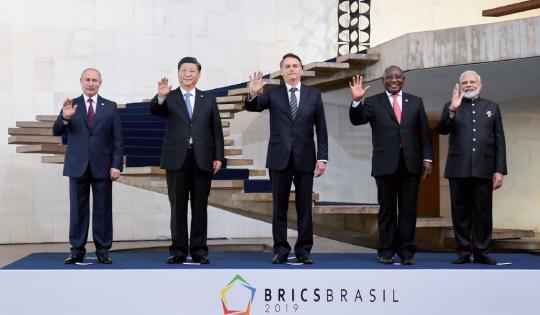 President Xi Jinping arrived in Beijing on Sunday, wrapping up his tour of Greece and Brazil, a significant trip that has been hailed by officials and observers as a major diplomatic success.

The trip extended China's hand toward Europe and emerging markets to strengthen win-win cooperation and promote multilateralism, they said.

Xi paid a state visit to Greece and attended the 11th BRICS Summit in Brasilia, Brazil, at a time when the international landscape is undergoing profound changes and global economic growth is slowing as a result of protectionism and unilateralism.

The president used his time in Greece to cement ties with the European Union member, deepening pragmatic cooperation and exchanges between civilizations, State Councilor and Foreign Minister Wang Yi said.

Xi also used the visit to stress the strategic significance of intensified relations between China and the EU, as positive interactions and mutually beneficial cooperation between them are in line with their common interests, Wang added.

Greece is among the first countries in the EU to sign an intergovernmental cooperation document with China aiming to promote cooperation in the Belt and Road Initiative. The turnover of Greece's Port of Piraeus, a flagship project in bilateral collaboration under the BRI, amounted to 70.6 million euros ($78 million) in the first half of this year, up 11.2 percent year-on-year.

In April, Greece joined the cooperation mechanism between China and the CEEC as a full member, creating new opportunities for the development of the mechanism as well as for China-EU relations.

Attending the 11th BRICS Summit, a gathering of the leaders of a bloc of five emerging markets — Brazil, Russia, India, China and South Africa — State Councilor Wang said that Xi sent out a clear call for strengthening the strategic partnership with BRICS and jointly dealing with various risks and challenges to safeguard their national sovereignty, security and development interests.

Xi also used the gathering to call for multilateralism in pursuit of world peace and common development as well as international fairness, justice and win-win cooperation, Wang said.

The BRICS leaders reiterated the fundamental importance of rules-based, transparent, nondiscriminatory, open, free and inclusive international trade. They said they remain committed to preserving and strengthening the multilateral trading system with the World Trade Organization at its center, a declaration issued after the summit said.

BRICS cooperation has enjoyed sound development over the past 10 years, dubbed a "golden decade" for the five-member bloc. Last year, the five accounted for about 23.5 percent of global GDP, and 16.3 percent of global trade.

Tulio Cariello, coordinator of the Brazil-China Business Council, told Xinhua News Agency that China plays an important role in the BRICS mechanism, not only having achieved its own development but now promoting closer ties between BRICS members.

In a period characterized by protectionism, Xi's speech at the summit sent a strong message about the importance of defending multilateralism for BRICS members and other countries, Cariello said.

"It is very clear today that China is one of the main defenders of multilateralism in the international system," he said.

"BRICS countries have to work together through mutual cooperation in trade and investment in important areas to keep the world economy buoyant and afloat," Sengupta said, adding that turbulence is doing "immense harm" to global trade and even bringing hardship to millions of people in developing countries.