Probe continues into dumping of pollutants 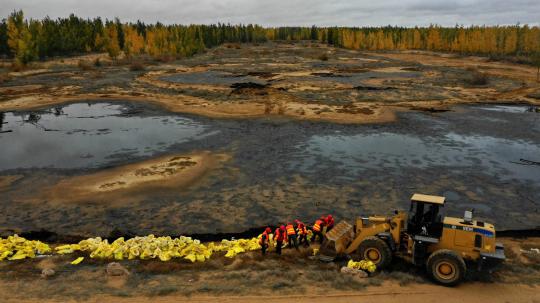 The Ministry of Ecology and Environment is continuing to investigate the dumping of pollutants near the edge of the Tengger Desert in northwestern China's Ningxia Hui autonomous region, it said on Thursday.

A large amount of black pollutants was discovered in a forest by a group of environmental volunteers conducting a survey near Shapotou National Nature Reserve in Zhongwei, Ningxia Daily, a local newspaper, reported on Sunday.

In a statement released on Thursday, the ministry said 14 polluted sites covering a combined 12 hectares had been identified.

An unnamed official from the Zhongwei government told news website ThePaper.cn the waste liquids had been left by papermaking company Meili, which abandoned the area after it went bankrupt.

The ministry said the waste was dumped between 1998 and 2004, adding that more than 64,000 metric tons of pollutants had been removed from the sites and were now awaiting chemical testing and treatment.

"Related departments should speed up the testing of pollutants and make scientific plans to properly treat contaminants and control the risks of possible soil pollution," it said.

"An investigation into the water quality under the polluted sites should be conducted immediately and surveillance should also be established as soon as possible to guide the recovery plan."

The statement said those responsible would receive severe punishment, and the environmental supervision department that failed to fulfill its duty should also be punished.

It said related departments should learn from the case, and urged them to investigate illegal activities that pose threats to the ecology of the Tengger Desert and nearby areas.

The ministry said on Saturday that an investigation team had been sent to the site. It also promised that information about the investigation would be made public in a timely manner.

The Tengger Desert was the scene of another major pollution case five years ago, when Ronghua Industry and Trade in Wuwei, Gansu province, was found to have discharged over 83,000 tons of sewage into the desert, polluting an area of more than 18 hectares.

Last year, a local court sentenced two executives of the company to three years in prison, with four years of probation. Each executive was fined 50,000 yuan ($7,100), and the company was fined 3 million yuan.