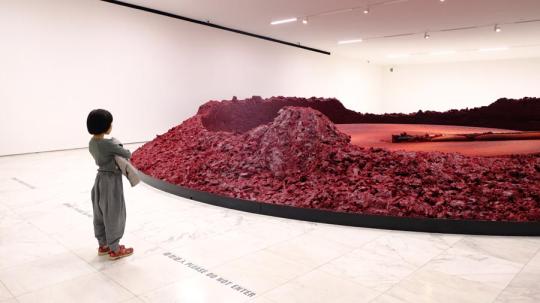 "Oh, gross! I nearly threw up," shouted someone standing in front of My Red Homeland, a centerpiece of British artist Anish Kapoor's exhibition at CAFA Art Museum in Beijing.

"It looks like a huge meat grinder. Heaps of mince mixed with blood," said the young lady, cupping her hand around her mouth to avoid the pungent odor of wax.

She admitted she had expected to experience the appealing work of an internationally-acclaimed artist.

"This installation is hair-raising, making me think of a slaughterhouse," another visitor said.

"Bloody scenes I've seen in films by Quentin Tarantino and Jiang Wen all came flooding back," another added. 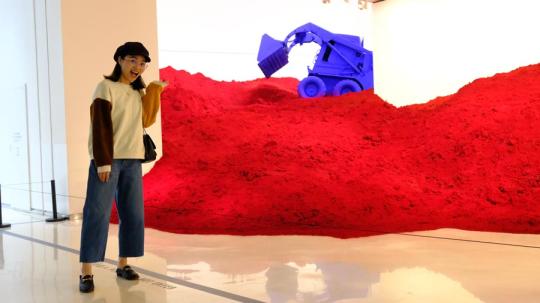 The shocking installation, 12 meters across, is comprised of a metal block, a circular metal surface and 25 tons of scarlet wax. The metal block moves gently like a minute hand on the face of a clock, churning the wax and generating various shapes.

It is one of four centerpieces in the Indian-born artist's first blockbuster solo in China at the CAFA Art Museum. The other part of the show will be staged on Nov 11 at the Taimiao Art Museum (Imperial Ancestral Temple Art Museum), next to the Forbidden City.

CAFA show features four monumental projects central to his recent practice, and a number of models of works chronicling his decades-long exploration. Exhibits at the Taimiao Art Museum include a roster of Kapoor's earlier creations.