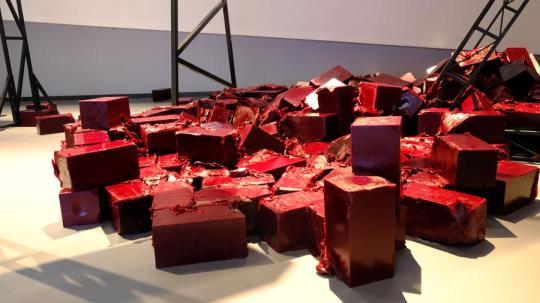 Recalling his first encounter with the piece at Berlin's Martin Gropius Bau exhibition hall back in 2013, the young visual artist said Kapoor's creation "only triggered thoughts of warfare and the death it entails".

"Kapoor is like a medium," said Lin Yong, a lay Buddhist, seeing Kapoor's art from another perspective. "He just presents what he saw in the unknown to us through his work."

"I know he is also a staunch Buddhist, and his artwork, albeit odd and stunning, can activate viewers' imagination, which is often dormant for most of the time," Lin added.

In the presence of his enigmatic work, Chinese viewers young and old are spellbound and give free rein to their imagination.

Such is the magic of Kapoor's work, or perhaps such is what the visual superstar wants to achieve through it. 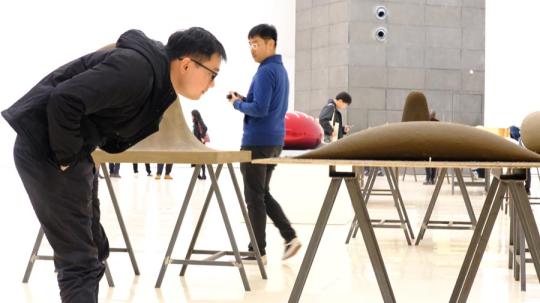 "What I try to do is to make objects that challenge the viewer and ask questions about how the viewer relates," Kapoor once said.

"The structure and color of Kapoor's work made a tremendous visual impact on me," said Wu Jian, a painter who attended the exhibition.

"I have no clue how they should be categorized. It seems that they are neither sculptures, nor installations, nor architecture," Wu added, concluding they somehow belong to a convergence of the three genres.

"Kapoor has pushed sculpture based on visual experience to the extreme. Everyone who comes to the exhibition needs to note this," Sui Jianguo, a famed Chinese sculptor and conceptual artist, said to China Daily Website.

Kapoor's work is special in that it builds a new understanding of space on the basis of phenomenology. Hence, to approach Kapoor's artworks, people have to view them in the flesh, Sui added.

The Taimaio exhibition runs until Dec 28, while the CAFA show ends on Jan 1.If you go: