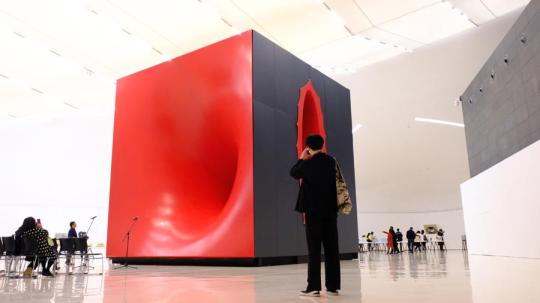 While the art community in China is very much familiar with Kapoor and has long been expecting such a show, he is little known among average Chinese, noted Lin Yong, a frequent visitor to the museum.

Kapoor was born in Mumbai to a Hindu father and a Jewish mother in 1954 and moved to London in the early 1970s to pursue art.

At the 1990 Venice Biennale, he was chosen as the only artist to represent Britain, and only one year later he won the prestigious Turner Prize. Ever since, his colossal and often site-specific creations have been all the rage in the global art scene.

Hailing from a multicultural background, Kapoor believes strongly that art is global.

"'Globalized' means an art object has made a connection between what it is and what the viewer brings to the situation," the artist explained, looking forward to Chinese viewers' interactions with his artworks prior to his China solo. "In making my work, I like materials, images and objects that make these connections that grab viewers." 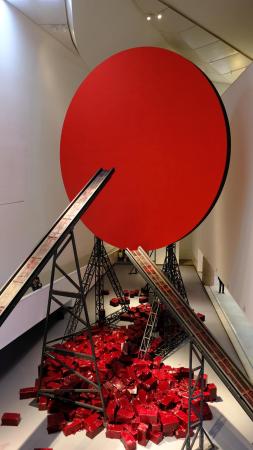 UK artist Anish Kapoor's installation Symphony for a Beloved Sunis on display at the atrium of the CAFA Art Museum in Beijing. [Photo by Yang Xiaoyu/chinadaily.com.cn]

Symphony for a Beloved Sun, the blood-red installation dominating the atrium of the CAFA Art Museum, is another piece that has prompted many to gaze, ponder and discuss.

Momentum gradually builds as the blocks near the conveyers' tip, and the climax doesn't come until the blocks plummet and kiss the ground — already strewn with piles of blood-red bricks of wax.

"The project struck me as the blood of those heroic martyrs in my history book when they were slaughtered during protests," said Zhu Hanru, a third-grader.

The showpieces stunned Chinese art professionals as well. "It's awesome. And I mistook it as a creation of some Japanese artist. It reminded me of the Japanese national flag," said a visual designer who declined to reveal his name.