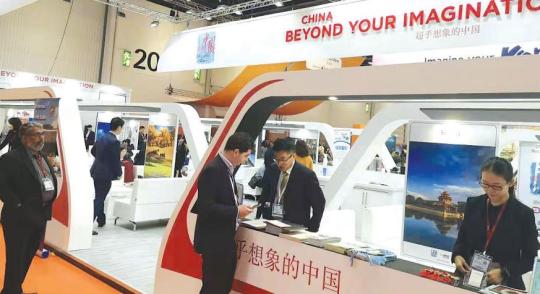 The audience spilled out from the designated seating area and into the walkway at one particularly popular morning session at the World Travel Market trade fair in London on Monday.

The session－titled "The Booming Chinese Outbound Market"－attracted a cohort of travel executives eager for tips and insight into the hottest commodity in today's tourism industry: the Chinese traveler.

That growth continued into the first half of this year, when Chinese people made 81.3 million trips overseas, a 14 percent increase on the same period in 2018.

Kate Xiong-Britton, who leads hotel contracting in Europe for Chinese online travel company Ctrip.com, said these impressive figures might even represent the calm before the storm.

"You are thinking currently China is booming, and your business with China is growing. I dare say it hasn't even started yet," Xiong-Britton told the audience.

"Less than 10 percent of Chinese people have passports. Most of the business comes from major cities like Shanghai, Beijing, Guangzhou－very international, mature cities. But China is a massive country, and Ctrip is working on opening up business to people all over China."

At the trade fair, China's Ambassador to the United Kingdom Liu Xiaoming said that Chinese tourism is an important driver of global economic growth.

Liu said that tourism can play a major role in job creation and poverty alleviation in emerging markets.

UK Tourism Minister Helen Whately said that the British government is keen to attract more Chinese tourists, who typically spend three times as much as the average travelers do while in Britain. Last year, 391,380 Chinese nationals came to the UK where they spent 657 million pounds ($648 million).

"China and the UK have similar ambitions for tourism," Whately said. "We both recognize how good it is to get people to travel around and go beyond the capitals, because that is a good thing for our economies."

At the Monday morning session, experts provided insight into growing trends in the Chinese outbound market. Increasing numbers of independent travelers are setting off from China, whereas in the past Chinese tourists have provided big business for group tour companies. Travelling Chinese millennials are generally adventurous and bilingual, and are looking to have unique experiences off the beaten track, the audience heard.

Rob Lang, director of the Edinburgh Tourism Action Group, or ETAG, highlighted the importance of a coherent social media strategy in promoting cities and regions.

Lang said the ETAG had significantly increased engagement with potential travelers after the group invited local businesses to advertise and promote on the same WeChat and Weibo channels, rather than opening individual platforms.

At the trade fair, 110 delegates from 30 Chinese provinces and autonomous regions set up shops at the China pavilion, which is modeled after a bullet train. The delegates are in London for three days and aim to cut deals with travel agents from other nations to boost Chinese inbound travel.

On Wednesday, the final day of the trade fair, the China National Tourist Office in London will launch a social media initiative, which will promote China as a travel destination across new YouTube, Facebook, Instagram and Facebook accounts.