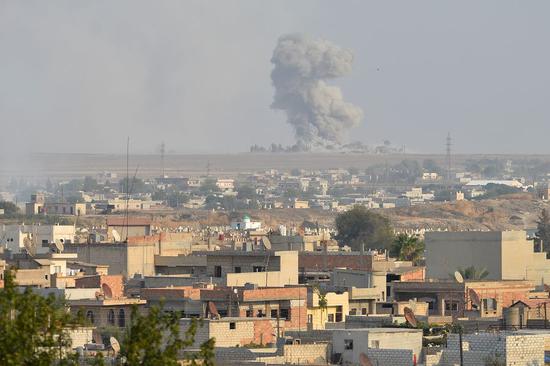 Photo taken on Oct. 9, 2019 shows the northern Syrian city of Ras al-Ain which is under Turkish military attack, as seen from the southern Turkish border town of Ceylanpinar.(Photo by Mustafa Kaya/Xinhua)

The U.S. forces in Syria have moved more than 1,500 Islamic State (IS) women from Syria to Iraq since Turkey launched an assault in northern Syria on Oct. 9, state news agency SANA reported Monday.

As the U.S. forces are withdrawing from northern Syria in tandem with the Turkish assault on the Kurdish militia, the U.S. troops have so far taken with them 1,500 IS women from the al-Hol camp in the northeastern province of Hasakah to Iraq, said SANA.

Al-Hol camp has emerged as a sanctuary for tens of thousands of people, including IS fighters and women, who were fleeing previous IS-held areas in eastern Syria.

The camp has been run by the Kurdish-led Syrian Democratic Forces, which had dealt strong blows to the IS in eastern Syria with the support of the U.S.-led coalition.

However, since Turkey launched its long-threatened campaign against the Kurdish forces, which are deemed by Ankara as terrorists and separatists, the United States started abandoning its positions and withdrawing to Iraq.