Chinese Olympic champion Sun Yang will face a Court of Arbitration for Sport hearing on Nov 15, and it will be an open hearing as he had demanded, Zhang Qihuai, Sun's legal representative, said.

The court will hold a hearing for Sun in Montreux, Switzerland, and the media and the public will be allowed to attend the hearing, Zhang said on his Sina Weibo account on Sunday night.

The public hearing will restore the faith in justice and fairness, and Sun will back his case with facts to prove that he has no problems in the procedure, Zhang added.

"In the history of CAS, there has been only one public trial before," Zhang said. "Sun insisted on a public trial to express both determination and confidence." 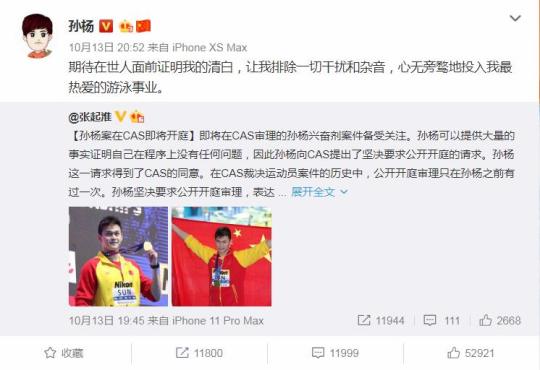 "I look forward to proving my innocence in front of the world, let me eliminate all interference and noise, and devote my heart to my favorite swimming career," Sun said on his Sina Weibo account.

"I hope he shows the facts to prove his innocence, so that he can prepare for the Tokyo Olympics," a fan of Sun said, expressing support for the national icon on Sina Weibo.

Sun's Weibo post went viral on Sunday night, and related topics had been viewed over seven million times by noon on Monday.

The 27-year-old is facing a CAS hearing over an incident last September at his home in Hangzhou, Zhejiang province, when he rejected a doping test after questioning the credentials of testers.

Although the Federation Internationale De Natation Association in January ruled he did not violate doping regulations, the World Anti-Doping Agency appealed to the CAS and is seeking stricter punishment.