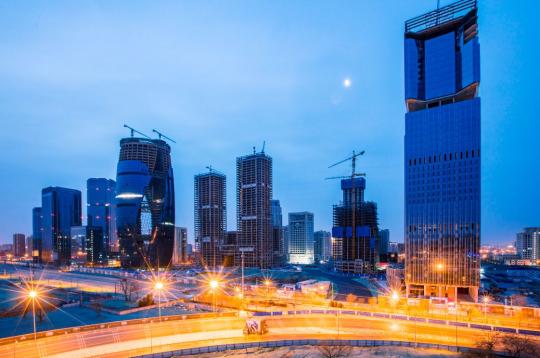 This submarket is distinguished by its locations outside of a city's prime and expensive commercial districts.

Supply of office space is more in such regions. What's more, costs are lower and quality better. Even tenants' experiences appear to be enhanced, creating more demand amid many urban renewal projects in Beijing, experts said.

In the first three quarters of this year, urban renewal projects contributed 259,000 square meters of office space, or 40 percent of the total new office supply in Beijing, according to a report released by real estate service provider Cushman &Wakefield in late September.

These projects are particularly favored by tenants for their stylish facades, intelligent office environment, adequate leasable space and efficient interior designs that can reduce rental costs, the report showed.

"As the city government is accelerating to optimize business environment and fostering smart buildings, more old office buildings in the downtown area will get upgraded, and this will become the future trend for the Beijing office market," said Wei Dong, head of the northern China research department at Cushman &Wakefield.

Beijing is set to add 2.42 million sq m of new office supply by the end of 2020, with 65.3 percent being new buildings located in emerging areas, according to the report.

Another report of property consultancy firm CBRE in September showed office submarkets contributed 54 percent to overall net absorption in Beijing from 2016 to 2018 annually on average. The figure was 31 percent from 2013 to 2015.

"The most important reason why tenants turn to non-core submarkets is that they can provide far more high-quality office space than core areas," said Zhang Jisu, senior director of the North China office of CBRE.

They have showed advantages in terms of infrastructure, such as clear floor height, raised floor and gross floor area (GFA) per elevator, and have gained popularity among quality-sensitive tenants, he said.

Space availability in core office submarkets has remained tight over the past three years. However, non-core submarkets such as the Olympic Sports Center and Wangjing areas have matured rapidly and attracted spillover demand from core submarkets, according to the report.

For example, some of the tenants in Zhongguancun, the Central Business District and Yansha commercial area moved to Wangjing, a former residential area between the Fourth and Fifth Ring Roads, which is now a dynamic commercial zone.

CBRE said considering the scarce new supply in most core submarkets and strict restrictions on land supply and office development in downtown areas, the availability of grade A space in core submarkets will tighten in the long run.

Meanwhile, non-core submarkets in southern Beijing, such as Beijing Lize Financial Business District and Tongzhou commercial area, show great future potential, thanks to the improvements of infrastructure and transportation, including new subway lines, the Beijing Daxing International Airport and the ready-to-open Universal Studios, according to Sun Zutian, head of research at North China office of CBRE.

Those submarkets will attract the bulk of spillover demand owing to their large volume of new supply in the pipeline, Sun said.

The percentage of grade A office stock in non-core submarkets in Beijing had risen from 9 percent in the first half of 2016 to 31 percent in the same period this year, according to CBRE.

Anthony McQuade, chairman of Savills North China Region, said in a previous interview with Chinese news website Jiemian that the lower rents in non-core submarkets help attract cost-conscious tenants who have plans for expansion or mergers and acquisitions.

The average monthly rent of grade A office in Lize, Wangjing and Olympic Park areas was about 44 percent, 35 percent and 16 percent lower than that in the CBD in the second quarter of this year. But the rental gap has gradually narrowed over the last three years, CBRE data showed.