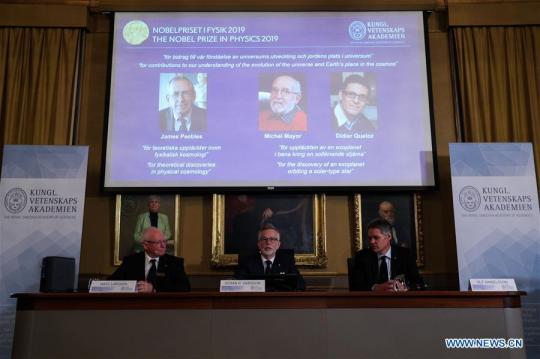 The 2019 Nobel Prize in Physics are shared by three scientists, the Royal Academy of Sciences in Stockholm announced on Tuesday.

The 2019 Nobel Prize in Physics has been awarded with one half to James Peebles "for theoretical discoveries in physical cosmology" and the other half jointly to Michel Mayor and Didier Queloz "for the discovery of an exo-planet orbiting a solar-type star."

This year's Nobel Prize in Physics rewards new understanding of the universe's structure and history, and the first discovery of a planet orbiting a solar-type star outside our solar system. The discoveries have forever changed our conceptions of the world, said the Nobel Physics committee.

In a telephone interview during the press conference with James Peebles, he emphasized the importance of group contributions, and that he did not "work alone", and that his colleagues also made great contributions. He said it was along with "group working" that he got new ideas, and grew with it.

Peebles also gave an important advice to young people who intend to commit to sciences.

"My advice to young people entering science: you should do it for the love of science ... You should enter science because you are fascinated by it," he said.