'There's a great deal to celebrate' 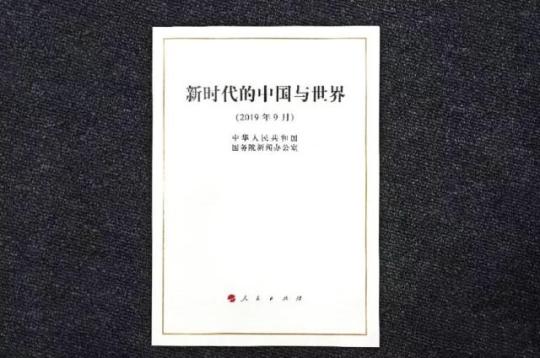 The document, "China and the World in the New Era", is issued by the State Council Information Office, on Sept 27, 2019. Photo/China Today）

China should be proud of things like its high growth, poverty alleviation, integration into the global economy and moving up the technology ladder in many areas, world experts said in comments on a white paper published on Friday.

"China and the World in the New Era" was issued by the State Council Information Office, days before the celebration of the 70th anniversary of the founding of the People's Republic of China.

The white paper highlighted China's achievements in various sectors over the past seven decades and emphasized that while working hard on its own development, China has contributed significantly to world peace and development.

Nicholas R. Lardy, senior fellow at the Peterson Institute for International Economics in the United States, said: "There's a great deal to celebrate, especially for the last 40 years. But I think that there could be more to come."

J. Stapleton Roy, US ambassador to China from 1991 to 1995, said leveraging development to serve the people is the responsibility of governments everywhere.

"Unfortunately, far too many governments do not meet that responsibility properly. I think China could be greatly congratulated on the way that it has been able to use its development not simply to strengthen its military capabilities, but primarily to raise the living standard of its people," he said in Washington.

"What's the most important aspect and which impresses me most is the unbelievable rise in the standard of living of the Chinese people," Roy said.

"Because in 1949, when the People's Republic of China was established, while I was living in Nanjing, the people right next door had so little food that the old people were not permitted to get out of bed, because they didn't have enough food to feed them," he said. "Now you don't find that anywhere in China."

Rana Mitter, professor of the history and politics of modern China at the University of Oxford in Britain, said China's record in poverty alleviation comes from various factors, such as its rapid urbanization, which permits the creation of a more dynamic economy, and initiatives on healthcare, welfare and pensions.

"However, more remains to be done. China's demographics are shifting and an older population means that there needs to be more funding for welfare provision in future. China should not move from relieving rural youth poverty to allowing urban poverty of older people," Mitter said.

A bigger challenge for the country is to establish a Chinese economy fit for the next stage of economic development, he said.

"To maintain an economy that allows the highest-value form of technology and services, more transparency, information flow and global openness will be needed, along with research and development that allows the widest and freest form of research," he said.