My railway experience in China 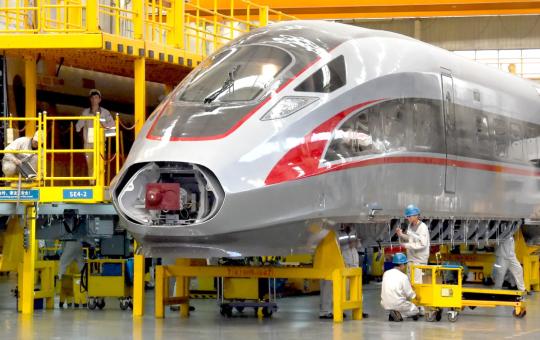 CRRC employees work at a subsidiary of the company in Qingdao, Shandong province. (Photo/Xinhua)

This year marks my fifth year of living in China. Aside from my job, one of my favorite hobbies is looking at China's railway maps, or surfing the internet to discover metropolis subway systems from different cities in China via Baidu Map, as known as Chinese version of Google Map.

Amongst them, Beijing subway is the one I can mostly relate to, as I take the subway frequently. With the 20 subway lines that form Beijing's metropolitan subway network, I can take the subway to visit the west part of The Summer Palace where I haven't discovered yet due to its massive coverage.

Together with the nearly completion of Beijing Daxing International Airport due to be operational in late September, which is touted as the biggest airport in Asia, I saw the designated route to the new airport pasted on many subway maps in most of the coaches. The new subway line between Caoqiao Subway station and the terminal will cultivate another economic growth area in southern part of Beijing.

Railway plays a crucial role that changes the landscape of China. In many mega cities in China with over 10 millions populations, a whole new subway line would influence the community along the line. The habitants, especially the office worker often relies on public transport to avoid the frustratingly bad traffic congestion. In the nation railway network, the expansion of High Speed Railway (HSR), referred it "Gaotie" in Chinese, not only saves more travelling time, but also a game changer to the transportation ecosystem. For example, the shortest traveling time between Shanghai and Beijing is 4 hours and 20 minutes for 1200km distance. If taking aircraft, 2-hour air travel requires additional cost for about time for pre-departure/post-arrival procedures and uncertain weather condition that would be affecting the punctuality. Compared with HSR, the land transport is more welcomed by the passenger due to its low percentage of delay and more simplified procedures.

Apart from that, HSR delivers another invisible but greater impact to Chinese people. There is a new phenomenon in Chinese minds to rethink their ability to climb up the social ladder. Those used-to-be hot discussion about the inequality of distribution seems have a way out. Albeit the geographical barrier, the faster speed of land transport sheds a light for those from periphery to equally acquire more resources which are mainly distributed in the high-concentrated area.

Like many other commodities, education is demanding in the Chinese market. Many middle-class households in major cities of China are willing to invest more on their children's education by sending them to better schools to receive better education. HSR builds up the bridge for those parents from second-tier city to achieve the best services from the capital.

Here is my personal experience. I was on a 7am HSR from Taiyuan, the provincial city of Shanxi back to Beijing after visiting my friend. It took almost-3-hour travelling time for 500 kilometers between two cities. After having my seat, there was a middle school kid accompanied by his dad sitting right next to me. We talked to each other and the father told me that he had applied a summer holiday learning trip to Europe for his kid from a Beijing-based educational agency. They left for Beijing this time to attend an interview in the afternoon, in hopes of securing the slot for their child. After settling the stuff, they decided to return to their hometown at Taiyuan by HSR. From their mind, the 500km of traveling distance between Taiyuan and Beijing was not their major concerns anymore.

In China, there is a rising trend about new alternative provided by HSR for Chinese people on narrowing the disparity. The railway development in China that bring about the rise of new economically promising cities is a testament to an effective Chinese model which links railway infrastructure, economic growth and people goodwill. The knowledges behind the model of development, together with the Belt and Road Initiative, would then be implemented to the neighboring countries which have ongoing infrastructure projects with China, including Malaysia.

With regards to the East Coast Railway Link Project (ECRL), this bilateral project presents us in a way of the reflection the firm political ties, and, in other way, to learn why infrastructure is matter to Chinese development model. From my first-hand experience, it allows us to ponder the long-term impacts of ECRL as to whether it will help stimulate the economic growth. But after that, we need to critically analyze the level of embeddedness of China model into Malaysia domestic reality, asking about whether Malaysian readiness, even the habitants living along the railway can live up with this. Many queries about whether the sufficient network to support ECRL as a whole system, the reality disparity of development between West and East Coast and the rooted Malaysian mentality relying on private cars or motorbikes always challenges the feasibility of the benefits of railway. But at least, we must be grateful that we have an international cooperation for us to learn, to show us what the further needs for Malaysia to perform better.

Just like that, a little conversation with the Chinese father now inspires me to think more about how we can implement well through the mutual understanding between Malaysia and China.

The author is a research assistant at the Peking University.