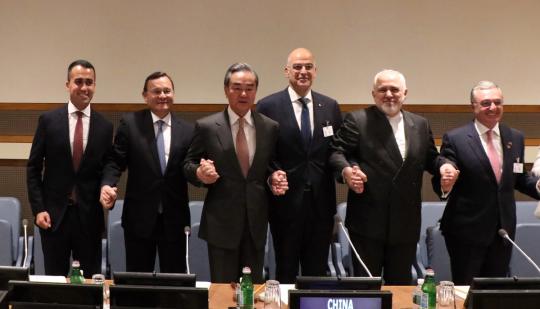 Wang Yi, Chinese state councilor and foreign minister (third from left), is joined by his foreign minister counterparts from other nations attending the Ancient Civilizations Forum at the United Nations on Wednesday. (HONG XIAO / CHINA DAILY)

"Culture is the most enduring power," said Wang.

"Exchanges and dialogues among civilizations could calm people down, and help people learn from the long history, learn from the mutual understanding, transcend various disputes and contradictions, find the key to solve today's challenges, and consolidate the humanistic foundation to build community of shared future," he said.

Wang spoke while presiding over a foreign ministers' meeting of the countries in the Ancient Civilizations Forum on Wednesday at United Nations headquarters in New York.

Wang is attending the 74th session of the UN General Assembly.

The parties passed the Joint Press Statement of the Foreign Ministers' Meeting of Ancient Civilizations Forum, where they stressed the forum as an important platform for dialogue and cultural cooperation among member states and underscored needs to enhance dialogue and exchanges among diverse civilizations.

Wang said that as countries with thousands of years of civilizations, "we should enhance our self-confidence in our civilizations, strengthen exchanges and cooperation, and contribute wisdom to solving our own problems and the problems of the modern world".

The foreign ministers exchanged views on strengthening exchanges on culture and civilization and have reached some consensuses.

The foreign ministers also called for further strengthening the cooperation between the forum and other international institutions and multilateral mechanisms, such as UNESCO, so as to expand its influence and visibility of the forum.

The parties said they appreciated China's presiding over the foreign ministers' meeting and look forward to going to Beijing this October to attend the Third Ministerial Conference of the Civilized Ancient Countries Forum.

The Ancient Civilizations Forum was jointly initiated by China and Greece, inviting countries with original cultural characteristics to participate.