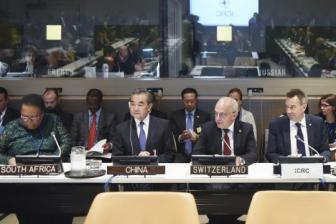 Chinese State Councilor and Foreign Minister Wang Yi （second left front）attends the commemoration of the 70th anniversary of the signing of the Geneva Conventions at the UN headquarters in New York, Sept 23, 2019. (Photo/Xinhua)

As this year marks the 70th anniversary of the founding of the People's Republic of China as well as the 40th anniversary of China-U.S. diplomatic relations, Wang said this is a historical moment that means a lot to both China and the United States. "We need to stand high, look far and take this bilateral relationship forward with vision and conviction," he said at a welcoming reception on Tuesday night while visiting New York to attend the 74th session of the United Nations General Assembly.

The reception at the China-U.S. Skyclub on the 89th floor of the One World Trade Center was co-hosted by the National Committee on U.S.-China Relations and the U.S.-China Business Council.

Wang said over the past four decades, China-U.S. relations have weathered many twists and turns. "Yet it has steadily moved forward with progress beyond even the boldest imagination," he said.

"On the other hand however, China-U.S. relations today have once again come to a crossroads," he add, pointing out "some people are using every means to depict China as a major adversary, marketing their prophecy that the relationship is doomed to fall into the Thucydides Trap or the Clash of Civilizations Trap, and even clamoring for a full 'decoupling' with China."