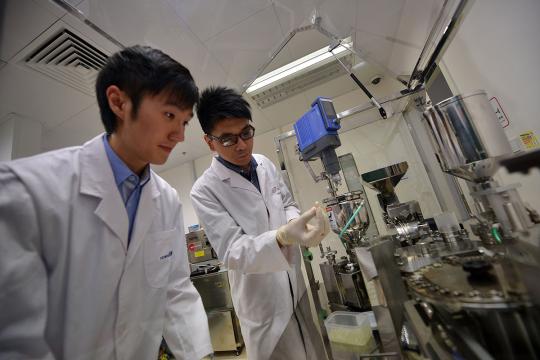 Researchers work in a lab at the University of Macau's campus in Hengqin, Zhuhai, Dec. 11, 2014. (Photo by Li Xin/Xinhua)

Macao is building stronger ties with the neighboring city of Zhuhai, Guangdong province, through an innovative pilot zone to transform and diversify its economy, which was built upon the gaming industry.

The pilot zone, with innovative policies to facilitate work, life and education for Macao residents, is expected to further assist the integration of the special administrative region, 20 years after its return to the motherland.

Across shallow waters to the west of Macao, the once-barren island of Hengqin, facing Macao's Taipa island, has become the flagship zone for cooperation between the two cities. Banking on the development of the 11-city cluster of the Guangdong-Hong Kong-Macao Greater Bay Area, Macao enterprises have enjoyed support in Hengqin, including tax benefits, simpler administrative procedures and subsidies.

By the end of last month, 1,594 companies from Macao had registered in Hengqin, spanning commercial and financial services, leisure and tourism, healthcare, and cultural and creative industries, according to Xinhua News Agency.

Since the opening of the Hengqin Creative Valley in 2015, it has incubated 349 startups, including 186 young entrepreneurial teams from Macao, the report said.

Over 20 Macao enterprises have received more than 433 million yuan ($60.7 million) in funding.

A 5-square-kilometer area of land has also been set aside in Hengqin for the Guangdong-Macao Cooperation Industrial Park.

The park will focus on the development of traditional Chinese medicine, cultural and creative, education and training industries. In a bold move, the Macao government will lead the assessment process of projects that will occupy half of the industrial park.