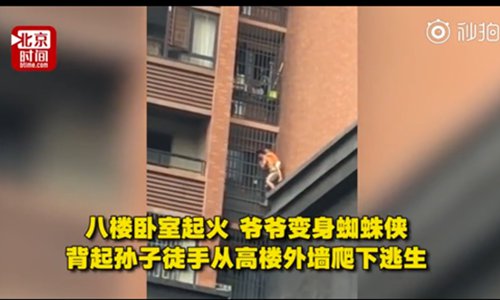 The grandpa carries his grandson along a narrow ledge outside his 8th floor. (Photo: screenshot of the video posted by btime.com)

A grandfather in Changsha, Central China's Hunan Province, carried his grandson along a narrow ledge outside his 8th floor in a heart-stopping attempt to escape a furious fire in his apartment.

A video posts by btime on Weibo, a Chinese social platform, shows the man carrying a child on his back as they sidestep along the ledge. He then attempts to use the bars covering the window of an apartment on a lower floor as ladder but he can't seem to get a foothold.

The shaky video ends just as the man and child appear to be in danger of falling, but btime reported that they were rescued by firefighters.

The video then shows thick black smoke billowing from a window and the fire appears to have completely engulfed the apartment.

The viral video on Weibo received a lot of comments, with many netizens saying the grandfather's attempted escape was too reckless and could have resulted in the death of both the man and the child. Others admired the man's courage and one netizen nicknamed him "Grandpa Spiderman."