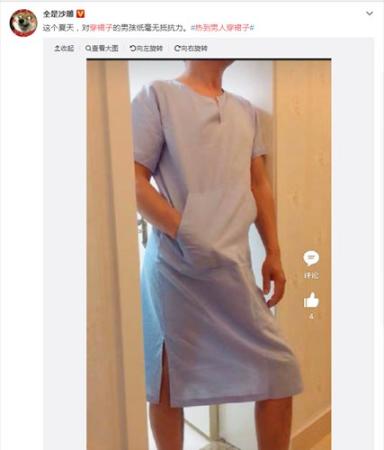 Successive sizzling 40 C days in parts of China are apparently driving men to try some non-traditional fashions to keep cool as e-commerce platforms are reporting a 92 percent surge in the sale of men's dresses, social media posts said.

"Dresses are no longer only for women but are unisex leisure wear for the summer," reads a slogan of a men's dress at an e-shop on taobao.

One e-shop says it sells hundreds of dresses for men every month during the summer.

The topic "hot enough to drive a man to wear a dress" has been viewed 130 million times.

The post shows multiple photos of men with their faces obscured wearing long, smock-like clothing. Many of their testimonials swear that wearing a dress really does help keep things as cool as a cucumber down under.

"Guys give it a try, you'll definitely love it," wrote a customer.

"From a biological and reproduction point of view, it's been proven that men more than women should wear dresses," wrote a netizen.