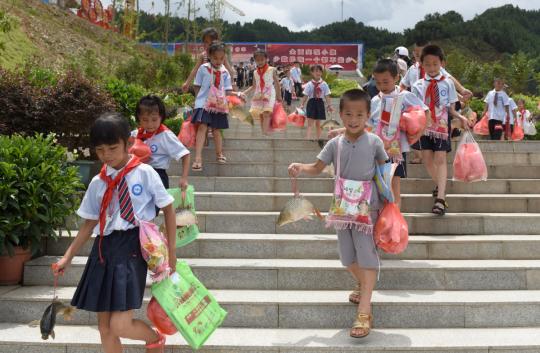 A primary school in southern China has raised eyebrows online by giving an unconventional reward to its best-performing students - live carp.

Photos and videos have circulated online and in newspapers showing pupils from Jiangchuan Primary School in the Guangxi Zhuang autonomous region cheerfully holding up the fish and award certificates, stirring discussions about rural schools' innovative practices to motivate students from impoverished families.

The school in Sanjiang Dong autonomous county said more than 140 students received the carp and sachets of jelly for their outstanding performance in the just-concluded final exam.

Principal Liao Xiaohua said the carp, symbolizing wealth and courage, were meant to encourage students and their financially constrained families.

"We used to issue notebooks and pencils as awards, but the parents were barely impressed," he said. "This time, students can bring back the live carp, so their whole families can have a feast and share their joy."

In Chinese legend, a carp turns into a dragon after jumping over the "dragon gate" in the Yellow River. The story is often used to encourage children from deprived families to climb social ladders by studying hard. The Chinese word for "fish" is also a homophone for "abundance" and a symbol of wealth.

All 856 students at the school live in a nearby community built to accommodate those who have just been relocated from impoverished mountain areas as part of the country's anti-poverty campaign.

Liao said the pupils began studying at the school five months ago. Though "their living and learning conditions have been greatly improved", the school is still working to help them acclimatize to the new environment.

"Life has been hard for the students, so we hope the prizes can cheer them up," Liao said.

The carp prizes amazed both the students and netizens. "It looks cruel for the fish, but remember this is a remote mountainous area where poverty is the main problem," said one comment on Weibo.

"Hope the kids will all turn into dragons one day," another said.

It is not the first time a rural school has created a buzz in China with innovative rewards.

Earlier this year, another primary school from the same county rewarded pupils with slabs of pork at the end of term, both to improve their meager diet and to encourage them to come back after the vacation.

Keeping impoverished rural students from cutting school has been a highly emotional issue in China, which has a long education-centered history. It is a theme that appears in many literary and screen works from Zhang Yimou's 1999 film Not One Less to Liu Cixin's sci-fi short story The Rural Teacher.

Wu Xianfan, deputy head of the county's education bureau, said the underdeveloped area is home to many "left-behind" children, who often stay with grandparents as their parents seek better paid work in cities, and those who leave school early due to financial problems.

The local government has been working to strengthen the bonds between schools and the families of students to keep them in class.

"We now pay more attention to motivation," Wu said. "In the past, some schools gave a cash award to students who spent it without letting their guardians know. Fish and pork, in contrast, are more likely to be shared with their guardians, so the whole family can feel the joy of the kids' success in school."