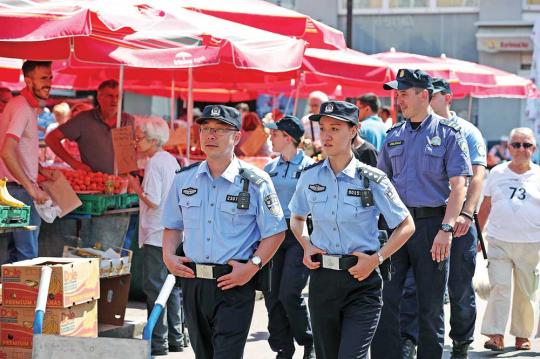 Chinese tourists in Croatia could be in for a surprise when they see police from their homeland patrolling the streets this summer.

For the second year running, Chinese police officers will be joining their fellow professionals in the popular southern European tourist destination, on the streets of the capital Zagreb, the historic walled city of Dubrovnik, tourist resort Zadar, and Croatia's biggest county, Lika-Senj.

Croatia has been running the Safe Tourism Season project since 2006, when officers from Hungary became the first overseas law enforcement officials invited to take part, and since then more than 800 officers from 19 countries have come to assist their Croatian counterparts at the height of the tourist season, undergoing special localized training before starting patrols.

In addition to the helpful presence of familiar officers on the streets, Chinese tourists will also be able to benefit from special telephone support lines set up in the regions where Chinese police are deployed, with them answering the calls.

Croatia, which was part of the former Yugoslavia and is situated in southeastern Europe, on the Adriatic Sea, is proving an increasingly popular destination for Chinese visitors.

Already in the first half of the year, there has been a 53 percent rise in the number of Chinese visitors to the ancient Roman port of Split, and a 20 percent increase in numbers going to Zagreb.

"Chinese tourists are mostly interested in historical and cultural monuments and sightseeing of the Upper Town," said Zagreb Tourist Board spokeswoman Darja Dragoje.

International police organization Interpol has praised the Safe Tourism Season initiative as an example of the best international police practice, and China's ambassador in Zagreb, Xu Erwen, said the inclusion of Chinese police in the project confirmed traditional friendship and cooperation.

A generation on from the brutal war that broke out in the aftermath of the collapse of the former Yugoslavia, the countries of the Balkan region are proving to be of increasing interest to China, in a variety of ways.

Chinese tourists can travel visa-free to Bosnia and Herzegovina, and have become an important part of the country's tourism industry. In 2018, official statistics revealed a 118.7 percent increase in the number of Chinese visitors to the capital city, Sarajevo, and a rise of 114.5 percent in overnight stays on the previous year. Earlier this year, a museum and walking tour dedicated to the 1972 film Valter brani Sarajevo (Walter Defends Sarajevo), which is hugely popular in China, were opened.

A similar visa-free arrangement between China and another of the former Yugoslav states, Serbia, has seen a steep increase in the number of Chinese students choosing to study in the country's universities.

Croatia and Slovenia are the only parts of the former Yugoslavia that are currently members of the European Union, but the wider Balkan region is of increasing interest to China economically because of the Belt and Road Initiative, and its proximity to the frontier between Europe and Asia.

Over the past two and a half years, China's Premier Li Keqiang has had five meetings with Croatian Prime Minister Andrej Plenkovic, most recently in April when he attended a meeting of the heads of state or government of Central and Eastern European Counties in Dubrovnik.