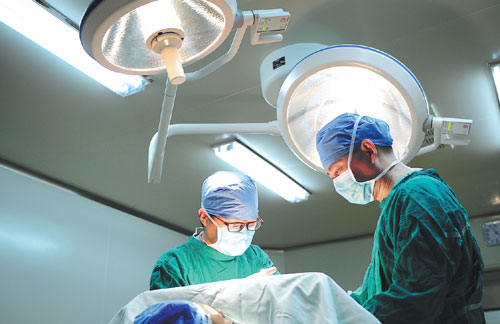 Currently, no more than 20 percent of breast cancer cases are diagnosed at a very early stage in China. （Photo by ZHAO JIN/FOR CHINA DAILY）

Treatment shifts from disease-focused approach to a patient-centered one

After doctors removed a cancerous tumor from her right breast, Dai Lifang, 37, woke up from the induced anesthesia and immediately explored the affected area with her hand.

"When I woke up, I touched my right breast. It was still there," she said. "I felt so relieved. It was almost the same as before, except for the little, 10-centimeter horizontal scar."

The surgery Dai underwent earlier this month offers new hope for women with breast cancer. It means that for many women, a key part of their bodies-one closely tied to their self-image-can remain intact.

As surgical procedures have advanced, cancer treatments have shifted more to a patient-centered approach from a disease-centered one, according to Liao Ning, Dai's surgeon and the head of the breast cancer center at the Guangdong Academy of Medical Sciences and Guangdong Provincial People's Hospital in Guangzhou, Guangdong province.

"As a woman myself, I understand what complete and full breasts mean for a woman's self-esteem and sometimes their intimate relationships," said Liao, who was trained in Germany.

Mastectomy, the removal of all or part of a breast, has long been the norm for certain breast cancers that have not yet spread throughout the body.

"I have seen young patients in their 30s who no longer had sex with their husbands after a mastectomy. The man lost his desire for the wife," Liao said. "That would hurt the woman's feelings badly and impact the treatment outcome over the long run."

For Dai, there was something more to celebrate during the holiday. She was released from hospital and received new hope for life. She was cancer-free and still "complete".

She's considering cosmetic procedures later to conceal the scar. "I am still young and the breast is necessary to my body and to my pride as a woman," she said.

Liao, the surgeon, said Chinese women with breast cancer naturally want to know if their breasts can be preserved. For some cancers, the answer is yes.

Breast-conserving surgery aims to remove only the cancer while leaving as much normal breast as possible. How much of the breast is removed depends on factors such as the location and size of the tumor.

But not all patients are right candidates, Liao said. It's usually an option for an early-stage patient.

In most cases the patient will need radiation after the surgery to prevent the cancer's return. Full mastectomies are less likely to require radiation afterward. The decision involves balancing many factors.

"As long as the cancer won't come back and I can keep my breast, I don't mind radiation at all," Dai said. She had been diagnosed with early-stage breast cancer.

To assure the patients of a quality life, Liao has been widely promoting breast-conserving surgery, particularly for younger patients with early stages of breast cancer.

Liao and her colleagues performed about 350 breast-conserving surgeries last year, accounting for 25 percent of all breast cancer surgeries at the center.

"Follow-up radiation therapy is necessary as it helps reduce the chance of relapse by two-thirds," said Chen Mo, a surgeon at the center. More than 95 percent of the recipients there survive for more than five years.

Liao added that with follow-up radiation therapy, "survival chances equal that of a mastectomy".

Other major breast cancer centers in top cities like Beijing and Shanghai have found similar outcomes but nationally it is a different story, with less than 10 percent of breast cancer surgeries performed conserving the breasts, far lower than an average of 63 percent in the United States.

In poor regions, such as the western parts of China, the rate can be as low as 3 percent, Liao said. "A lack of competent breast cancer specialists is mainly to be blamed for the gap," she said.

Currently, no more than 20 percent of breast cancer cases are diagnosed at a very early stage in China, according to the National Cancer Center, which follows the rates of cancer incidence, survival and mortality by collecting and analyzing data from about 370 cancer surveillance centers across the country.

Public awareness needs to be enhanced as well, Liao said.

Dai had no idea breast-conserving surgery was available until she was informed about her options at the hospital.

She discovered her cancer early this year when an ultrasound scan detected a tumor measuring 1.1 centimeters in diameter in her right breast during government-funded free breast cancer screening at a community clinic.

"It was hard to believe at first because I could feel nothing wrong with my breast," she recalled. "But now I kind of feel lucky. I am the only one of the six patients at the hospital ward who is getting the breast-conserving surgery."

Liao said that for younger patients in their 30s: "I strongly recommend breast-conserving surgery if her condition permits. They still have long way to go in their life."

But she also stressed that life and health is the top priority and cannot be compromised. "We follow strict clinical indications in deciding the surgery options."

For instance, an early-stage patient would still receive a mastectomy if she tested positive for breast cancer-causing gene mutations, which indicate a high possibility of relapse.

Moreover, social and economic factors have to be considered before making a treatment decision-for example, whether the patient can afford the extra costs of radiation therapy, usually ranging from 40,000-80,000 yuan ($6,000-$12,000) and whether she can access following-up intervention as needed, Liao added. 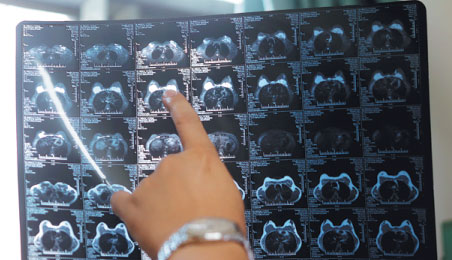 Shao Zhimin, director of the breast surgery section of the Shanghai Cancer Center said there are various ways to "retain completeness"-for example, breast reconstruction, which builds the look and shape of the breasts.

"Our team focuses not only on the long-term survival of the patients but their social and psychological demands," Shao said.

To achieve a patient-centered treatment, Liao said, "it must be a multi-disciplinary team (MDT)".

Chun Li, another patient of Liao, was impressed by the MDT approach. "There were four doctors including the breast cancer and cosmetic surgeons during my operation," she said.

The 35-year-old had reconstruction during her mastectomy of the left breast on May 28. "Surgeon Liao told me before the operation if my nipple tested free of cancer cells I could have the reconstruction. I was quite upset then," recalled Chun, who is married with no children.

"My husband comforted me saying my health, rather than complete breasts, is what he cared about the most. He said he would love and stay with me no matter what," she recalled, unable to hold back tears.

"To me, life is as cruel as it is tender. I am the lucky one among the unlucky."

Having the surgery stitches removed, she now dared to see herself naked in the mirror.

"My husband sometimes stood beside me, whispering in my ear 'you are beautiful'," she said.

The surgery is important for women to achieve a sense of physical completeness and mental comfort, he said. "Without exception, women shed tears over the loss of their breasts after a mastectomy."

Like Liao, Jiang also called for closer partnerships between breast cancer and cosmetic surgeons to allow more patients to have complete breasts.

Currently, less than 5 percent of patients opt for reconstructive surgery, according to Jiang.

"A comprehensive treatment approach centered on the individual needs to be implemented to better help breast cancer patients heal and return to normal life and society in a good state," she said. Breast cancer is the most common type of cancer among Chinese women, with its incidence growing by around 4 percent annually, higher than the global average, according to Xu Binghe, a leading breast cancer specialist at the Cancer Hospital of the Chinese Academy of Medical Sciences.

Also, the onset of the increasing incidences of breast cancer, compared with other cancers, starts at a younger age, around 30, and peaks at around 55, he said.

In 2015, roughly 304,000 women in China were diagnosed with breast cancer, accounting for 17 percent of all newly diagnosed cancer cases among women, according to the latest statistics from the Chinese National Central Cancer Registry.

In that year, 70,000 people died from breast cancer, accounting for roughly 8 percent of total cancer deaths, it reported.

The overall rate for breast cancer in developed countries is 91 percent, he said.

Chen blamed factors such as low rates of early detection and poor treatment for late-stage sufferers for the gap.

The 2019 China-US Summit Forum on Breast Cancer will open today in Guangzhou, with hundreds of top breast cancer experts from the two countries.

"Such academic exchanges and cooperation will be of mutual benefits for both sides and represent the start of wider and deeper collaboration in the future to better contain breast cancer," she said.

"That's in line with global best practice," he said.

"Even late-stage breast cancer might, in the future, be treated just like a chronic condition, rather than a terminal disease," he said.

Liao summed up, "Assuring patients that they will receive the best treatment possible and not be affected in later life is also the responsibility of us doctors."