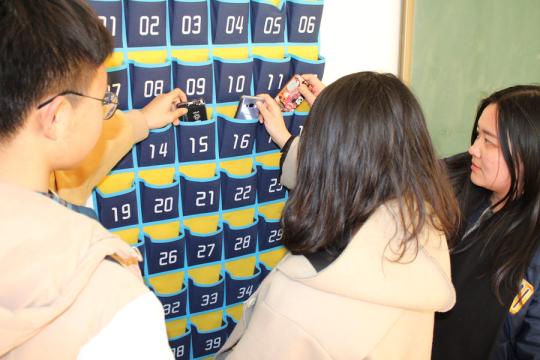 Students put their mobile phones in the bags in the front of a classroom in Jilin Huaqiao University of Foreign Languages. (Photo provided to chinadaily.com.cn)

A recent regulation released by authorities in East China's Jiangxi province, which bans college students from taking electronic devices such as mobile phones and iPads into classes, has stirred a heated debate among Chinese people, the Legal Daily reported.

An online survey on the issue has shown that the numbers of netizens respectively for and against the regulation are equally matched, according to the paper.

Some said mobile phones usually prevent students from concentrating on classes. While mobile phones can help students during class, "I would often do some other things like checking my social media and texting out of habit as soon as I had a phone in my hand," said Guo Jing, a college student.

Some argued that such a ban was excessive, and that mobile phones and other devices are not solely to blame for students' lack of concentration in school, according to the article.

Banning college students from taking mobiles into classes is hard to enforce, as many of them need phones to help them study, Xiong Bingqi, vice president of the 21st Century Education Research Institute, told the Legal Daily.

"Even if mobile phones are banned, if a teacher simply reads from the textbooks, students will still struggle to concentrate. The main factor in retaining students' attention is the quality of teaching," he said.

Echoing his words, many call for efforts from teachers to improve their teaching, the article reads.

"As college professors, we should reflect on how our teaching is received by students and should enhance our teaching quality to help our students be more engaged," said Zheng Ning, a teacher with Communication University of China.