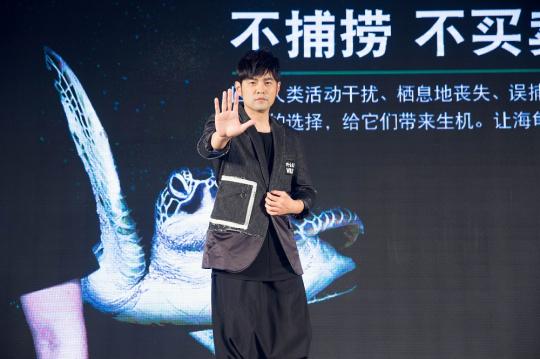 Jay Chou makes a gesture representing his commitment to protecting wild animals at the event in Beijing, May 27, 2019. (Photo provided to chinadaily.com.cn)

Everybody can play their part in protecting endangered wildlife by not purchasing products made of endangered animals and also telling their family and friends to do the same, Chou said at a news conference held in Beijing on Monday.

Chou has teamed up with WildAid in a year when Asia has seen record numbers of pangolin seizures and a new United Nations report has highlighted devastating losses to biodiversity.

The report found that 32 million hectares of primary forest were lost between 2010 and 2015, half of all coral reefs are now dead, and the number of native species in land and water around the world has declined by one-fifth in little more than a century.

One species that embodies the challenges in protecting marine ecosystems is the sea turtle. Found throughout the world's oceans, sea turtle populations are in rapid decline due to habitat loss, climate change, overfishing, and illegal trade in sea turtle eggs, meat and shells.

A WildAid survey found that 17 percent of respondents in a survey of 1,500 Chinese residents had purchased sea turtle products and 22 percent were considering making a purchase in the future. However, 60 percent agreed that poaching is common and a serious problem and 95 percent supported greater national protection for endemic sea turtle species.

Meanwhile, the pangolin is the most illegally trafficked mammal in the world. Major seizures in just 2019 alone included 30 metric tons of pangolins in Malaysia and 8.3 metric tons of scales in Hong Kong. Two seizures in Singapore recently totaled 25.6 tons.

"The alarming scale of the pangolin trade in recent decades is driving this important species to disappear across Asia and now Africa," said John Baker of WildAid at the event, "and despite the laudable efforts of agencies across the region, it's imperative for consumers to say no to these products and report any illegal sales."