The National Cultural Heritage Administration has announced China's key archaeological achievements of 2018. Four field projects discovered over 1,000 relics, ranging from the period of the Warring States (475–221 BC) to the late West Han Dynasty (206 BC–9 AD). The discoveries showcase the civilizations in different periods and regions of China's history.

More than 4,500 inscribed bamboo and wooden slips and tablets were unearthed in a tomb in Jingzhou, in central China's Hubei province at the end of 2018. The relics were from the West Han Dynasty and included a wide variety of objects such as a calendar, chronological record, and classical prescription.

"They were stored in a bamboo container. Through the protection of the container, we can clearly learn about the relationships between the slips. Some of them are very precious ancient documents. And with these classics, we can pass down the Chinese civilization," said Zhu Yanshi, Archaeology Institute researcher of the Chinese Academy of Social Sciences.

Another tomb was also discovered in Jingzhou. 324 bamboo slips from the Chu of the Warring States Period recorded key events in the history of the Chu and West Zhou periods, which occurred around 3,000 years ago. 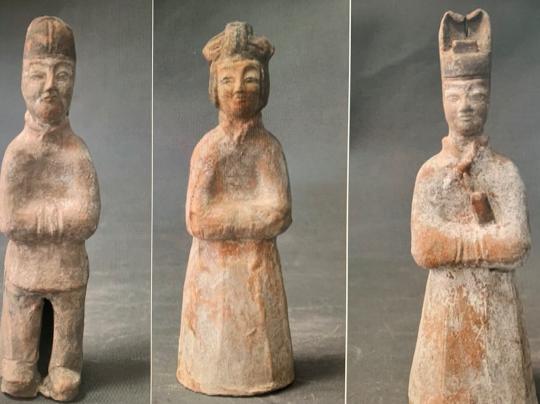 Relics unearthed from the tombs built between 304 and 439 AD in today's Shaanxi Province. (CGTN Photo)

In northwest China's Shaanxi Province, two large tombs were discovered. They are believed to be constructed during the 16 States period from 304 to 439 AD. Cultural relics unearthed from the tombs show the characteristics of different cultures and areas.

"After Zhang Qian traveled to the western nations as an envoy, and opened up the Silk Road, cultural communications among countries became more and more frequent. Up until the Wei, Jin, Southern, and Northern Dynasties and 16 States period, the cultural exchange among nations in the north, south, east and west was at a peak. Though there were wars and immigration, there were fresh ideas for the Chinese civilization, which brought many new things," Zhu Yanshi said.

And in the suburb of Xi'an city in northwest China, another tomb from the Han Dynasty was unearthed. The tomb used a stone and sand base to prevent grave robbery and was also waterproof. It showed a high level of architecture in the late West Han Dynasty, and provides important materials for researching the burial customs of the upper class in that period.

These four discoveries from 2018 were recognized as great achievements in China's field of archaeology.