Efficiency up, pollution down in farming sector 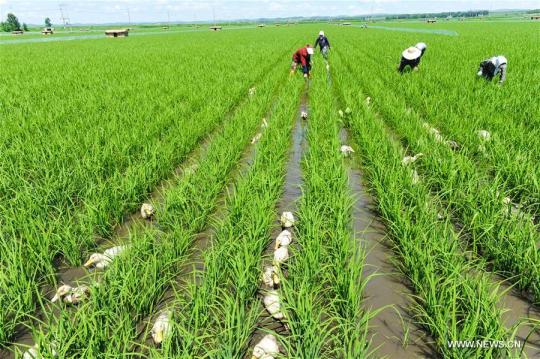 China has made great progress in promoting agriculture over the past several years, resulting in reduced environmental pollution, according to a report released by the Chinese Academy of Agricultural Sciences.

The use of synthetic fertilizers in China started to decline after reaching a peak in 2015, with about 59 million metric tons used in 2017, which is a decrease of more than 1.6 million tons from 2015, the report said.

The use of pesticide, another major source of environmental pollution in agriculture, started to decline in 2015. Nearly 1.7 million tons were used in 2017, a decrease of more than 8 percent compared with 2014.

Nearly 84 percent of straw left after harvests is now reused for various purposes, including fertilizer, animal feed and fuel, instead of being burned and polluting the air. About 70 percent of all waste from husbandry and poultry are also treated and utilized.

Plastic sheets, which are widely used to cover farmland in dry areas to reduce evaporation and that are normally discarded after harvests, are being recovered in more areas to reduce pollution. In major areas where such plastic sheets are used, including the Xinjiang Uygur autonomous region and Gansu province, nearly 80 percent of them are recovered, the report said.

Living conditions in China's rural areas have also improved in the past few years, thanks to improved infrastructure such as waste and sewage treatment facilities, it said.

With the implementation of the rural rejuvenation strategy, green and sustainable development of agriculture is expected to get a continued boost, which will result in more sustainable agriculture, more wealthy farmers and more livable rural areas, it said.

The strategy was proposed by the top leadership in 2017, and it aims to modernize the rural areas and agriculture by 2035, and build a strong rural economy by 2050.

Although progress has been made, China faces challenges in promoting green development of agriculture due to problems such as limited agricultural resources, environmental pollution and degradation of ecological systems in rural areas.

Wang Hanzhong, vice-president of the Chinese Academy of Agricultural Sciences, said a bottleneck exists in China's agricultural development, including a lack of consistency between supply and demand, the heavy use of pesticides and synthetic fertilizers and the water scarcity in northern China.

While waste is inevitable in grain production, the proportion of chemicals having a useful effect on the plants is around 55 percent in European countries and the United States - significantly better than China.

Zhang Fusuo, a member of the Chinese Academy of Engineering, said combined efforts by the government, researchers, enterprises and farmers are necessary to promote green agricultural development.

"A feasible solution is to have pilot programs in certain counties to gain experience, including finding technological solutions, creating an environment for entrepreneurship and cultivating talent that includes professional farmers and technicians. That way, experience can be promoted across the country," he said.