PLA advances in arms, ability over past decade 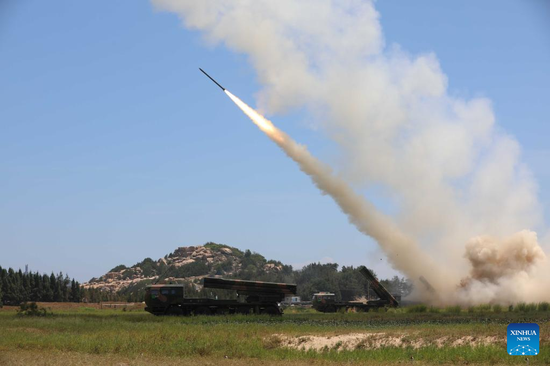 During the recent live-fire exercises carried out by the People's Liberation Army, multiple types of cutting-edge hardware were deployed, such as the DF-17 hypersonic ballistic missile and the YY-20 aerial refueling plane.

This new hardware has extensively enhanced the PLA's fighting prowess and made it one of the best equipped militaries in the world.

Observers said that the past decade has been an unprecedented time in which the Chinese military commissioned a great deal of high-tech weaponry and equipment, as the country has set the goal of basically realizing the modernization of national defense and the armed forces by 2035.

President Xi Jinping always attaches great importance to the development of hardware and technology for China's armed forces, stressing that advanced weaponry and equipment are critical to military modernization.

Xi, who is also general secretary of the Communist Party of China Central Committee and chairman of the Central Military Commission, has repeatedly urged the PLA to make full use of modern science and technology to strengthen its combat capabilities.

Speaking at a top-level military conference in Beijing several years ago, he told high-ranking commanders that along with the evolution of military technologies, the factor of hardware "is becoming more significant" when it comes to winning modern warfare.

"It would be very difficult to defeat the enemy if there are generational gaps between our weapons and theirs," the president said.

While meeting the military's hardware development planners and executives from State-owned defense contractors in December 2014, Xi said that advanced weaponry is a key symbol of a powerful military and also an essential pillar of national security and rejuvenation.

It has always been the Party's goal to build and operate a well-equipped military, he said.

At a grand gathering in Beijing in August 2017 to celebrate the PLA's 90th founding anniversary, Xi called on the armed forces to uphold scientific and technological innovation and closely follow the latest global trends in defense technology.

In his speech, he emphasized the importance of farsighted planning as well as the research of strategically crucial, cutting-edge and game-changing technologies. Xi also said that science and technology must be better used to facilitate the military's development and boost its operational capabilities.

The report to the 19th CPC National Congress in late 2017 set the goal of basically realizing the modernization of national defense and the armed forces by 2035 and fully building the armed forces into world-class forces by the middle of the century.

At the 19th National Congress of the CPC, Xi Jinping Thought on Strengthening the Military, which answered the major questions on building strong armed forces in the new era, including the tasks, targets, principles, strategies and approaches, was included in the Constitution of the CPC.

In October, during the Chinese military's most recent hardware conference, Xi urged professionals working in the defense sector and the armed forces to "break new ground "in the development of weaponry and to continue to strive to achieve the military's key goals.

He said workers in the defense sector and equipment officers in the armed forces should uphold the Party's thought on strengthening the military and its defense strategies in the new era, speed up the implementation of tasks planned for the coming years, and establish a modern management system for equipment.

Due to relentless efforts in hardware and technology development, the PLA now has much advanced hardware such as stealth fighter jets, aircraft carriers, large destroyers and hypersonic missiles. Compared with old weapons, the new equipment has greater firepower, higher information-processing capacity and better mobility.

For instance, the PLA Air Force has become the world's second-largest operator of stealth fighter jets following the United States thanks to the deployment of the country's domestically developed J-20.