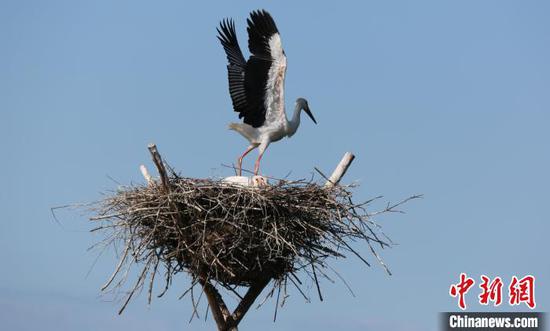 (ECNS) -- Eight years of satellite tracking have found that oriental white storks in Honghe National Nature Reserve in northeast China's Heilongjiang are expanding their migration area beyond China, said an official from the reserve.

The Honghe National Nature Reserve began to trace oriental white storks since 2015 in order to collect data on the breeding, foraging and international migration routes of these birds.

"We let some young birds born in the nature reserve wear tracking equipment to determine their movements via satellite," said Zhu Baoguang.

One of the 28 young oriental white storks in the reserve flew over Yalu River on Oct. 5 and has stayed in the Democratic People’s Republic of Korea for three days. This is the first time that such a migration route has been recorded.

Some young birds have been found in the Heilongjiang River area and Russia after leaving their nests and in late October, traveling south to spend the winter, mainly at Poyang Lake in Jiangxi Province, satellite tracking shows.

The oriental white stork, a migratory bird species under first-class national protection, has been listed as endangered by the International Union for Conservation of Nature.

Now, there are more than 8,500 oriental white storks in the world, which has tripled in 20 years.

Satellite tracking is conducive to the population recovery of the species and significant to its protection in China and Russia’s Far East region.