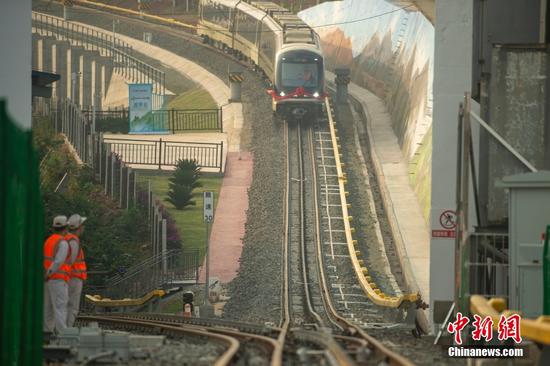 The train features automatic driving and protection technology, as well as intelligent analysis of big data storage, which relies on high-tech technologies such as the BeiDou Navigation System and 5G Internet of Things.

Independently developed by China, the train consists of four units with a rated capacity of 145 passengers.

The rack rail train will become an important means of transportation in mountain areas and for sightseeing thanks to its safety, strong adaptability, environmental friendliness, and low construction cost.

The train will operate on the country’s first rack rail line, a sightseeing railway connecting Dujiangyan city and the Siguniang Mountain tourist spot in Sichuan.

The Dujiangyan-Siguniang Mountain section is expected to open at the end of 2023, with the whole line put into operation in 2026.

The travel time between Dujiangyan and Siguniang Mountain is expected to be shortened from five to two hours.