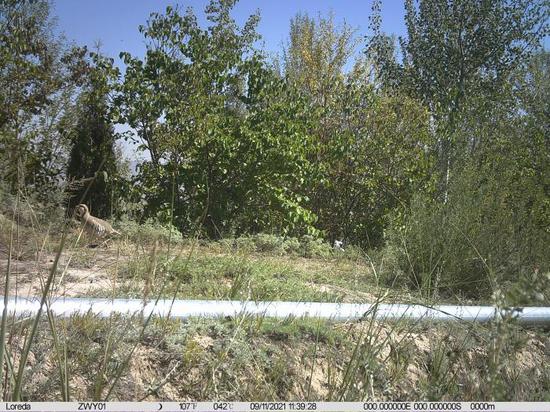 Photo shows a ring-necked pheasant and a rusty-necklaced partridge in Xishan Botanical Garden in Xining. (Photo provided by the Northwest Institute of Plateau Biology, CAS)

(ECNS) -- Rare wild animals have been spotted in Xishan Botanical Garden in Xining, capital of Qinghai Province, in the past one year, according to the Northwest Institute of Plateau Biology, Chinese Academy of Sciences (CAS).

Multiple wild animals have been recorded by infrared cameras in the botanical garden like the Chinese desert cat, leopard cat, and Eurasian badgers, along with ring-necked pheasants since last May, said Lian Xinming, an expert with the institute.

“Although Chinese desert cats are usually distributed across Xining and surrounding areas, it is rare to see them in such an urban botanical garden with large human traffic, which has surprised us and made us proud, too,” said Lian.

According to Lian, most of the images taken by infrared cameras in the day depict pedestrians, stray cats and dogs, as well as ring-necked pheasants and magpies that aren’tscared of humans, while wild animals are mostly captured at night.

It proves that wild animals have grasped appropriate behavior strategiesto live among the interference of human activities, that is,separating activity time from that of humans in order to achieve harmonious coexistence, said Lian.

Xining is the only capital with a population of more than one million on Qinghai-Tibet Plateau. It is also a zero-waste city pilot in northwest China.