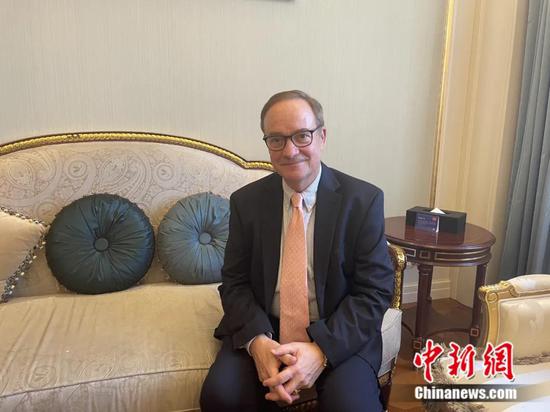 (ECNS)-- Manuel C. Menendez, founder and CEO of MCM Holdings, is an American businessman and philanthropist with deep ties to China. Menendez's moto is "World Peace through World Trade". In his background, it is very understated that he played an active role in China's return to the world market in the late 1970s. In 1980s, he was CEO of Great Eastern Development (GED) which completed the first U.S. -China Equity Joint Venture in China for a major Fortune 100 company.

In fact, his experience is much more than his resume suggests. Menendez came to China in 1979 and has witnessed the entire process of the county's reform and opening up. His Chinese name "Meng Deshi", was given to him by Chinese leader Deng Xiaoping in 1985.

During the 2nd China-U.S. Economic and Trade Forum held by Western Returned Scholars Association, Pang Wuji, reporter and director of the macro-economy editorial sector of the Economic Department of the China News Service, talks to Menendez. Menendez believes that the U.S. and China are not going to, and not able to decouple. Their economic and trade relations are moving in towards a positive direction. He shared his insights on the "real problems" in the current U.S.-China economic and trade relations, and made many practical suggestions.

Pang Wuji: Since September, Washington has continued to make positive gestures on U.S.-China trade relations. It seems that after resuming talks between the U.S. and Chinese trade teams, the communication between the two sides has advanced to deeper and more specific area. How do you see this change?

Manuel C. Menendez: First of all, the frequency of the meetings are much more than in the past. Each meeting has made a little bit of progress. I think the positive signs have been built up based on the frequency and frankness of the meetings. What we need to do is more engagement, more meetings, more discussions. That has to be an urgent priority.

With respect to the U.S. - China trade disputes, I think both sides have legitimate concerns. There's not going to be one meeting where they are all solved. It's going to be a step-by-step process to make progress, an incremental approach.

There are many challenges facing many countries of the world due to the global pandemic. There are pressing issues that take away the immediate focus. It's like "having so many fires burning, you have to decide which fire to put out first". So I think that people's health and safety has to be the top priority of any country. Alongside of that, the U.S. - China trade relations has to be one of the top priorities.

Overall, I just would advocate more frequency. I'm very positive in the U.S.-China trade relations by having the interactions. Talking is always better than silence. That's already a good sign with these more frequent interactions between the U.S. and China which means that the windows are open again for discussions. I think the U.S. trade representative has talked about recoupling.

Pang Wuji: What do you think of "recoupling" between the U.S. and China?

Manuel C. Menendez: I don't think we've ever decoupled. Our economies and countries over the past 40 years have become so interdependent, interconnected and intertwined since China’s reform and opening up.

I don't think it's possible for the two economies to ever decouple. There's going to be areas of high sensitivity when it comes to, for example, cyber security, selective areas of high tech. That's why, again, I advocate higher frequency of discussions to work through differences and to find common ground.

My only recommendation as a businessman is, you can't take all the issues at the same time.

What I suggest is to develop what's called "momentum". When you drive your car, the most energy is used when you just start, and as you get rolling you use less and less energy, and there's less friction. What I like to see happen is the U.S. and China start moving incrementally, make positive progress on areas both sides agree to create momentum and to do so we all need to get back to the table of talking, because creating positive momentum is important.

And the way to do that is when you have these big meetings, just pick on a few things that both sides in advance could agree to... like climate change, etc. It’ll at least develop the "momentum" coming along. They're not only good for the U.S.-China relations, but also good for the world.

Pang Wuji: What would add to this "momentum" for U.S.-China relations?

Manuel C. Menendez: When it comes to U.S. - China relations, I put things into two buckets. One is policy related, and the other bucket is structural issues.

Structural issues are very complicated where you might have to change a rule or law. Dealing with them takes a long time. So if you're going to create momentum, pick some policy issues. A great policy issue is the tariffs.

I’m not saying tomorrow, both countries can agree on removing tariffs on the whole list, but incrementally certain categories can get rid of the tariffs immediately, going back to the way they were before. For example, agricultural products, health related items, environmental technologies equipment, garments and footwear, or things that are not sensitive areas to talk about.

Pang Wuji: As the U.S. continues to face greater inflationary pressures, imports of good quality and inexpensive products from China can actually help alleviate such pressures. With that as a basis, will the U.S. and China usher in a smoother trade relationship? What are your expectations?

Manuel C. Menendez: Let's take one step back before I answer that. I think the thesis about the trade imbalance has been a big "political football" in the U.S. When I speak to business people and many government officials, I tell them that the trade imbalance is actually not caused by China.

There is a market only when there is a demand. The trade imbalance of the disproportion where there's more goods coming from China to the U.S. is because many U.S. companies order and manufacture products from China, because the quality is good, and the price is good. And as the rule of the world in business, the best quality, at the best price, with best delivery is the winner. When companies like Walmart, Costco, Nike, Apple are ordering things for the U.S. market. That's where the trade imbalance comes from.

Companies set up early in China, including Procter & Gamble, Starbucks, McDonald's, and General Motors, have grown well. These companies have served the Chinese market well as well as the U.S. market. Some people in the U.S., like former U.S. President Trump, say, "China is costing us jobs," and that's not true. We need to get back to the kind of mutually beneficial and cooperative U.S.-China relationship that we had before.

Manuel C. Menendez: Part of this is just the politics in the media. If people have never been to China and do not understand the situation, it may cause misunderstanding.

I've been here since the opening since 1979. And my company put together the first U.S. - China joint venture. So I've seen what has happened in China with my own eyes. When you think of what China has been able to do in 40 years, it's unbelievable.

If I was the richest man in the world, I would take mayors of every city, governors of every state, and even members of the U.S. Congress and ask them to come and see China. Not only Beijing and Shanghai, but wherever I am in China, people here are very friendly to me. As Confucius said: "When people come from apart a far, you should be happy and welcome them."

Confucius also said China is a benevolent society. So China is not interested in conflict, and has never been aggressive. The other concern that people misunderstand is that as China rises, it doesn't mean that the rest of the world is diminished. China's rapid growth is driving huge demand and that has significantly helped other countries’ economies grow.

China is already playing the role of a stabilizer. For example, during the Asian financial crisis in 1997, many countries devalued their currencies, but the RMB kept strong, which helped stabilize Asia.

Pang Wuji: How has the economic and trade friction between the U.S. and China affected American companies?

Manuel C. Menendez: There's no winners in the trade war, only losers.

Trade war from Trump till now has not worked at all. There was this idea floating around the previous administration, and in some political circles that if the U.S. makes the tariff so high on imports from China into the U.S., that when they bring something in from China, it's equal to the price of the U.S. or close to the price of the U.S., then the factories in China would close and will move back to the U.S. - but that never happened. What was also missing in the thinking is many of these U.S. companies that set up China operations sell in the huge China market and are making money for the U.S. shareholders and were not set up just for exports to the U.S.. Tariffs should not be used as a mean of trying to improve competitiveness and level the playing field for every business.

China did not initiate the trade war. They responded to it tit for tat. China's way is to respond to external pressures.

When trade becomes difficult, as well as logistical interruptions, some U.S. companies need to expand and redesign their supply chains. As far as I know, the vast majority of companies have not, and will not, abandon the Chinese market altogether. If you're a major player in the world market, you're not likely to abandon your business in the world's second largest market…China!

Pang Wuji: What are the current expectations of the U.S. business community for U.S.-China relations?

Manuel C. Menendez: The vast majority of U.S. businesses, especially the ones that are involved in China, they want the relations to get better, without any doubt.

They also want more dialogue on those areas that are issues on both sides. There are certain areas, certain markets in China that foreign companies, not just U.S. companies want to enter, but sometimes the government hasn't fully opened them up yet. People may go like "Oh it's protectionism". But it's not true.

I always try to explain to my friends sometimes you have to look at the timeline of China. In my education, China never opens up any market completely immediately, because it's a big country, with 1.4 billion people. So what I've learned is that China will try maybe in one area opening up a certain market and see if there's any issues, and if there are issues they try to solve them and then they will open the China market up step by step gradually. So I ask my friends to be patient and remain positive.