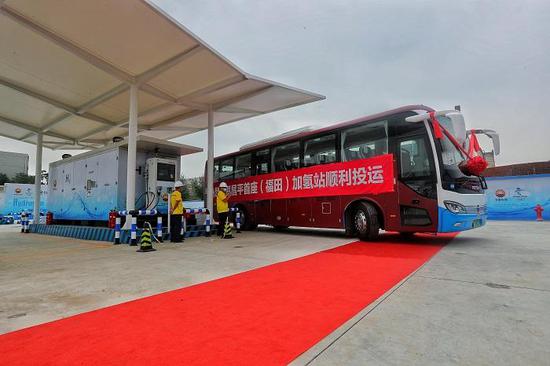 Built by PetroChina, Futian hydrogen refueling station is located in Changping District and covers an area of 1700 square meters. With an estimated daily fueling capacity of 600 kilograms, the station can refuel 50 to 60 hydrogen fuel cell vehicles a day.

It is estimated that five hydrogen refueling stations will support about 212 vehicles driven by domestically made hydrogen fuel cells during the Beijing 2022 Winter Olympics, which will reduce carbon emissions by about 30 tons.

The first hydrogen refueling station to serve Beijing in 2022 has been put into operation in Zhangjiakou City, Hebei Province, with daily fueling capacity of one ton, providing services for roughly 470 new energy vehicles. Two more hydrogen refueling stations will be built by PetroChina to achieve the goal of carbon neutrality and emission peak during the 2022 Winter Olympics.