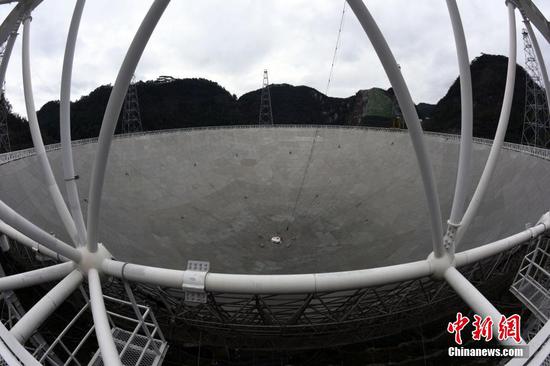 (ECNS) -- China's Five-hundred-meter Aperture Spherical Radio Telescope (FAST) has for the first time detected neutral hydrogen line emission via its 19-beam receiver from three of four targeted extragalactic galaxies, according to the Chinese Academy of Sciences.

The new findings illustrate the ability of FAST in studying dark matter.

"With dynamical measurements of neutral hydrogen and CO, we can estimate the mass distribution of galaxies at different radii," said Cheng Cheng, a researcher at Chinese Academy of Sciences' South America Center for Astronomy .

Observation of these galaxies was an important part of an international research project, or Valparaíso ALMA Line Emission Survey (VALES), led by Professor Edo Ibar from Valparaiso University in Chile.

FAST started formal operation on Jan. 11, 2020 after it passed a national assessment. It is the largest telescope with the highest sensitivity in the world. Extragalactic neutral hydrogen detection is one of its most important scientific goals.

The research result was published in Astronomy & Astrophysics Letter.