Leisure market in China has much room for growth: OC&C

(ECNS) -- The latest report by global consulting firm OC&C Strategy Consultants shows that the size of the leisure market in China has huge headroom to grow. It has become the second largest in the world with a production value of 479 billion U.S. dollars, just after the United States.

Four sectors of the market -- cruise trips, theme parks, sports and food delivery -- have high potential growth in consumption, indicating a massive opportunity in these new experiences, according to the report. 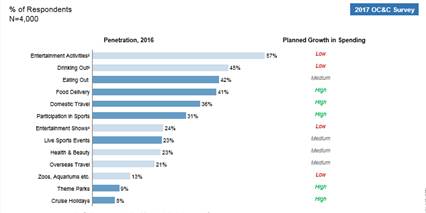 Cruise trips and theme parks display much more potential than the other two sectors. Figures from Cruise Line International Association show that the number of cruise passengers in China reached 2.1 million in 2016, which only accounted for 0.16 percent of the total population in China, much lower than the figures of developed countries.

Jack Chuang, a partner at OC&C in Greater China, advises that dealing with "an awareness challenge" may help operators expand businesses even faster, as only 8 percent of their respondents are aware of such leisure activities.

Finding out what Chinese customers really want could boost the appeal of cruise trips, Chuang said. For example, some companies have equipped ships with karaoke rooms or offered Gong Cha bubble tea, a favorite among young Chinese.

What's more, various onboard services and facilities may help consumers enjoy longer trips, it was added.

Due to geographical factors, Chinese people can take cruises to a limited number of countries, such as departing from Hong Kong to Indonesia or Vietnam, unlike the trips provided around Europe where people visit multiple places at one time. Longer cruise trips, like a two-week-long trip, might appeal to regular customers, Chuang suggests.

For the theme-parks sector, Chuang details two perspectives which he thinks the industry should improve to grasp more consumers. One is about IP, or Intellectual Property, of theme parks. "Chinese theme parks don't have a lot of IPs like Disney or Universal Studio," he said. Because many people visit theme parks for specific IPs like Disney movie characters, an influential IP is necessary for Chinese companies to familiarize the brands to their customers.

Fantawild is admired by OC&C as a good example for its Chinese counterparts, as they are building IP on Xiongchumo (Boonie Bears), a local cartoon TV series that is attractive to huge numbers of Chinese children, rather than creating a new figure for their theme parks.

The other point is about the experience. According to the report, the so-called Young Excitement Seekers, which are another major group of customers at theme parks, mainly look for high intensity experiences that are rarely seen in local parks.