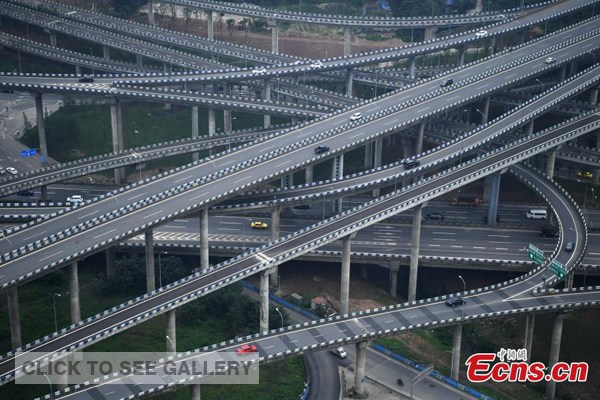 A hub interchange completed on May 29, 2017 in mountainous Chongqing city has startled the Internet with its range upon range of roads and outlets. (Photo/China News Service)

(ECNS) - The newly completed Huangjuewan Flyover in Chongqing is designed to meet transport demand, and drivers will not lose their way with the help of road signs and navigation systems, according to an official with the Chongqing infrastructure construction department.

The five-storied flyover in Nan'an district of Southwest China's Chongqing Municipality connects more than 20 ramps, and is believed to be the largest, most complicated and functional hub interchange in the country's southwest area.

The flyover has gained widespread attention since construction started in 2009. Some netizens said it would be a great challenge to any navigation system.

"People will have to drive around the city once after taking a wrong ramp," they joked. "Just like experiencing a one-day tour of Chongqing."

The five-storied design was required because the flyover connects three express roads going to different destinations, an official told the Beijing Youth Daily, adding that drivers can turn around within one-kilometer's drive if they take the wrong route.

"Drivers can complete the flyover in one minute under normal conditions," he said.

The speed limit on the main road is 60 kilometers per hour, and 40 km per hour on the ramps.

In addition, road signs on the flyover and navigation systems help drivers find the roads, he said.

So far, only some of the ramps are open to traffic, and navigation systems commonly used by drivers had not reported any mistakes, the official said.

All ramps will be opened once construction of the airport express is complete.