Killing of 'king of fish' in Guangxi sparks public outrage

(ECNS) -- The death of a giant eel, which used to live in the Lingwan Lake in Nanning City, Guangxi Zhuang Autonomous Region, has sparked outrage online, according to local media.

Earlier last week, a person going by the online name "Diving and Photography Lover" posted on the twitter-like Weibo service, claiming that a one-meter-long marbled eel in the lake had been killed by a man.

In a photo posted with the text, the man, whose face was pixelated, is holding a metal stick going through the eel's head. 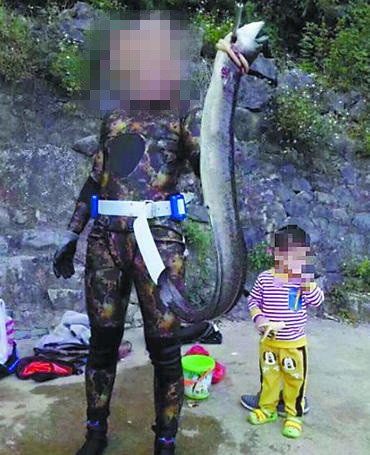 Picture posted on Weibo shows a man posing with a eel he killed. (Photo from web)

Shi Jun, a fish expert in Guangxi, confirmed that the eel in the picture is an endangered species. It's rare to see a marbled eel of such a size, Shi said.

The Weibo account denounced such cruelty, which was soon echoed by more netizens.

A local diver surnamed Liu said the eel had lived in the lake for at least seven years, and was an attraction among diving fans.

Divers should respect the natural environment and the creatures that live underwater, Liu said, adding that the killer should be shamed for his behavior.

Netizens also found a video supposedly revealing more details of the hunting process, with a clear picture of the man's face and the tools he used.

The local fishery authority has started an investigation into the case. Many people have offered to help by collecting more information about the hunter.

The marbled eel, officially known as Anguilla marmorata, is an endangered and nationally protected animal in China. It is usually 331 to 615 milimeters in length and 250 grams in weight. Large ones can weigh over 30 kilograms.