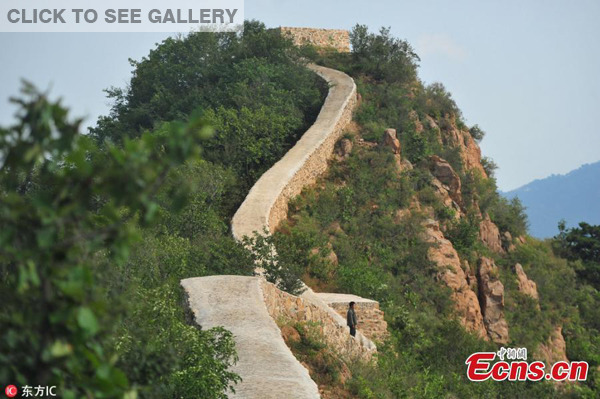 A view of a renovated section of the Great Wall in Suizhong County, Northeast China's Liaoning Province. Known as Xiaohekou Great Wall, original construction started on the section in 1381 during the Ming Dynasty. (Photo/IC)

(ECNS) -- A section of the Great Wall dating back more than 700 years has been filled and leveled with mortar, which local authorities say was reasonable and lawful maintenance.

Some people exposed online that a section of the Great Wall in Suizhong county, in northeastern Liaoning Province, had been destroyed, saying that the broken walls and crenels had been filled with mortar, making the Wall look like a piece of road.

The section in question has been praised as the Most Beautiful Wild Great Wall, because it runs through mountains in the county and attracts visitors, Chinese Business Morning View reported.

In response, an official from the county's bureau of cultural heritage protection said part of the section was at risk of collapse after heavy rains, making the maintenance necessary.

Wang Jianhua, from the bureau, said maintenance of the section, from the design, approval, repair and completion, had followed reasonable and lawful standards.

Experts and officials from the province's cultural protection authority will also review the project.