Teen boy sneaks onto airplane to Dubai to become beggar 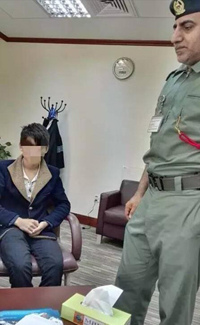 (ECNS) -- A 16-year-old Chinese boy has been caught sneaking into Dubai by hiding in a plane's cargo compartment, with plans to make a fortune there as a beggar, Chengdu Business Daily reported.

Under the cloak of darkness, the boy climbed into the cargo compartment of an Emirates Airlines plane in Shanghai on May 26. He was later detained at Dubai's airport.

The teenager said he knew smuggling was illegal but believed he would face no serious consequences as he is a juvenile. He also told local police the environment in the cargo compartment was ok, despite having had no food or water during the journey.

Ma Xuliang, China's deputy general consul in Dubai, said the case was still under investigation and he believed the local law to be objective and civilized.

The teenager was expected to be deported and banned from entering Dubai again.

Ma also said previous media reports about high incomes in Dubai were a rumor and the emirate banned begging of any kind.

Dubai police arrested 197 beggars during their Ramadan anti-begging campaign, which ran until July 4 in 2015.