Winner of the Top 10 Influential Micro-bloggers, known as the "Big V accounts", enjoy a moment of stardom. Though some wore masks to hide their identity, fans are still enthusiastic in interacting with them via tens of thousands of tweets sent on the summit's live page.

"Huiyi Zhuanyong Xiaomajia" hails from the southern city of Shenzhen and rose to fame for sharing content of a cute Scottish Fold cat and Samoyed dog couple in a funny and amiable way. 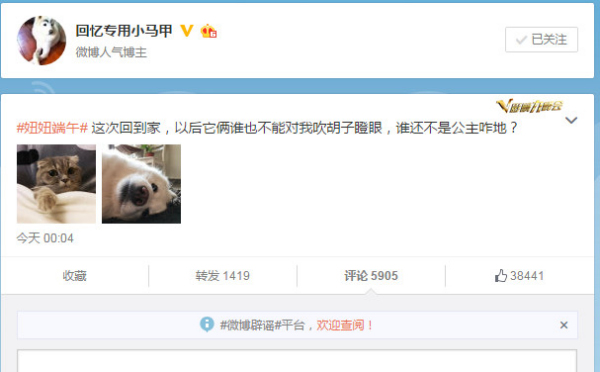 Famous Micro-blogger "Huiyi Zhuanyong Xiaomajia" gets more than 5900 comments for a single tweet about his cat and dog.

According to his fans, "Xiaomajia" started the account to mark a failed romantic relationship. Most of his early tweets feature his adorable dogs together with some smart and funny lines, which were later established into his unique style that captured the hearts of millions of followers. The fact that he never showed his face added to his appeal throughout his interactions with fans, with most imagining a warmhearted, caring and reliable person.

"Gudabaihua", another Weibo star, first stood out thanks to his expertise in English and American culture. Labelling himself as a talk show translator on Weibo, Gudabaihua mainly provides excerpts of English talk shows, speeches and other videos that are not available in Chinese media. 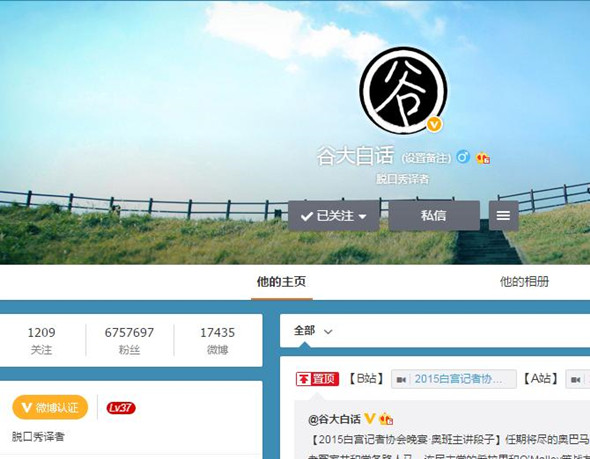 Varying in their paths to fame, though, these star users all distinguished themselves with remarkably personal styles that appeal to various public needs.

The value of quality content is fully recognized by a report published during Wednesday's summit. Sina Weibo announced that the platform had 2.3 million professional post composers by November, covering 47 niche markets. Among them, 253,000 writers can achieve over 100,000 views of their posts in a month.

Considerable public attention is turning tweeting into a lucrative business. Premium writers have raked in 200 million yuan ($31 million) in the first 11 months this year from follower tips and more sophisticated marketing co-operations.

The business is getting serious and has drawn the attention of big capital. Luogic Show, an online community started by former CCTV host Luo Zhenyu, has just finished its second round of fund-raising. The brand value is now estimated at 1.32 billion yuan.

More online platforms have pledged to nurture the infant business, underlying its significant role in the current media landscape. In September, news aggregator Toutiao.com announced a supportive plan, vowing to ensure each of its top 1000 contracted contributors a monthly profit of 10,000 yuan. Its rival Yidianzixun.com will refund its independent writers all revenues of advertisements appearing in their articles. Sohu.com also launched a new channel for online freelancers.

However, analysts say the burgeoning market needs further evolution to overcome ordeals related to unfair competition and copyright infringement. Some pointed out that most content contributors still have to rely on social media platforms, leaving them in inferior conditions when negotiating rights with platform operators.