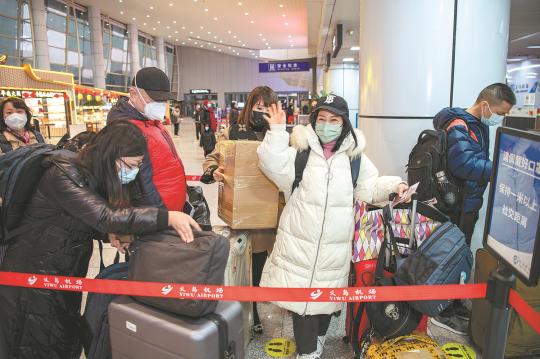 At a workshop of Rollmax Shutter Component Co Ltd, a Ningbo, Zhejiang province-based roller shutter component manufacturer, workers are busy welding, inspecting and packing octagonal tubes and other accessories for windows that will make their way to many homes in Poland, Hungary and Saudi Arabia later this year.

These orders were brought back by Ding Yandong, the company's president, during his trips to Hungary and the United Arab Emirates late last year.

Holding more than $2 million worth of foreign orders in his hand, Ding said he will travel to countries including the United States, Spain and Indonesia after the Chinese Lunar New Year, which falls on Jan 22 this year, to secure more orders in overseas markets, retain existing clients and further mitigate the negative impact caused by the COVID-19 pandemic.

With more Chinese exporters preparing to travel abroad to expand their sales channels and book booth spaces at the offline China Import and Export Fair, or Canton Fair, in Guangzhou, Guangdong province, this year, these efforts will enable them to conduct more face-to-face meetings with foreign clients, and better understand global market demand and challenges, said Lin Meng, a researcher of supply chain management at the Chinese Academy of International Trade and Economic Cooperation in Beijing.

Amid faltering global trade and softening demand for various goods, owners and sales heads of Chinese export-oriented companies in provinces including Shandong, Jiangsu, Zhejiang, Guangdong, Fujian and Sichuan have taken both chartered and commercial flights to several countries to participate in business events, such as Asia Fashion Fair 2022 Tokyo, Food Ingredients Europe 2022 in Paris and China Homelife Dubai 2022 over the past two months.

Together with the government's latest opening-up measures, these moves will help stabilize China's foreign trade in the first half of the year. Participating in international exhibitions can be a practical way for Chinese exporters to build relationships with new clients, judging from the deals sealed in overseas markets over the past two months, said Lian Ping, chief economist at Zhixin Investment.

Facing fierce competition from Southeast Asian countries, high energy prices and surging inflationary pressure in the US and Europe, China must step up its efforts to stabilize foreign trade and avoid a decline in foreign trade growth, said Lian.

The Zhejiang provincial government has made plans to organize more than 1,000 business delegations to explore overseas markets this year, with over 10,800 companies participating.

"Support will be granted to companies in aspects such as funding sources and approval processes," said Chen Zhicheng, deputy director-general of the Zhejiang Provincial Department of Commerce.

By sending 100 delegations and sales representatives from more than 1,000 companies abroad between January and April this year, Ningbo, one of Zhejiang's export hubs, has also set a goal to gain $10 billion in foreign trade orders by the end of April.

Apart from grabbing overseas orders, a delegation from Hubei province signed an agreement with Rohde &Schwarz GmbH &Co KG to establish a regional center in Wuhan, Hubei's provincial capital, during its eight-day trip to Germany and Sweden in December. Rohde &Schwarz is a German manufacturer of network testing technology.

Once completed, the center will be responsible for the company's sales, import and export of electronic measuring instruments and wireless communications, broadcasting and IT security technologies in Central China, said Zhu Yanlin, head of the foreign investment division, Hubei Provincial Department of Commerce.