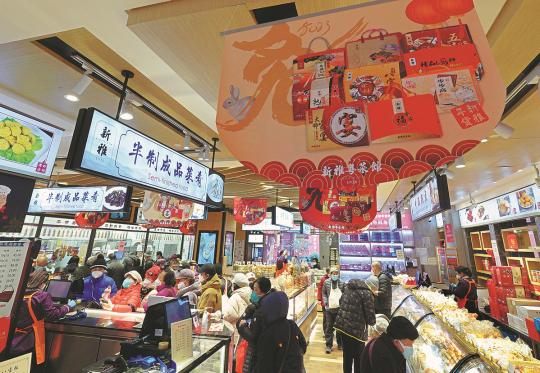 Many restaurant chains in major Chinese cities are witnessing a boom in reservations for Lunar New Year's Eve family reunion dinners on Jan 21. In addition, they have introduced ready-to-eat meals for delivery to their patrons' homes as not everyone can be accommodated for the dine-in service.

Following the optimization of COVID measures, demand for dining in at restaurants, particularly during the upcoming weeklong Spring Festival holiday, has grown, market watchers said.

Some popular major restaurants in Beijing are already seeing customers wait in queues to be seated during peak hours.

Quanjude, one of China's best-known roast duck restaurant chains, has seen its Olympic Village branch — which has some 400 dining seats, including those in the main hall and 17 private rooms — fully booked for dinners on Jan 21.

"In the past few days, we have received an increasing number of inquiries about family reunion dinners. We have also launched different kinds of ready-to-eat meals for consumers," said Fan Hui, general manager of the branch.

The ready-to-cook packages mainly include several main courses, such as roast duck, fish, beef and chicken. They require about eight minutes of steaming. Those having family reunions at home will be able to enjoy restaurant-grade food and beverages.

The ready-to-eat meal sector has been gaining traction ever since the COVID-19 pandemic started spreading. Market insiders attributed this trend to the convenience such meals offer as they require minimum preparation.

Annual sales of China's ready meals market are expected to exceed 1 trillion yuan ($148 billion) in the next six to seven years, based on an estimated compound annual growth rate of 20 percent, according to Shenzhen-based research firm Askci Consulting.

Meanwhile, restaurant chain Xuji Seafood said for the Jan 21 Lunar New Year's Eve and the first day of the Lunar New Year, its 60 branches across China have been nearly fully booked, and only some branches located in remote areas have a few tables and private rooms still available for reservation. The company said this year's bookings may have already reached 90 percent of the level seen during the Spring Festival holiday of 2019.

"Since the fourth quarter of 2022, the catering sector in China started to rebound gradually. Some popular restaurants in Beijing, and some in Wuhan in Hubei province, Chengdu in Sichuan province and Changsha in Hunan province have seen common scenes of long lines of diners waiting to be seated," said Zhongtai Securities in a note circulated among its clients.

"Some restaurants have even witnessed hotter sales compared with the same period of 2019, when there was no pandemic. In January, food and beverage consumption in many places across the country has significantly beaten our expectations."

This could prove a positive for stocks of companies from the catering sector and related segments listed in the A-share market, observers said.