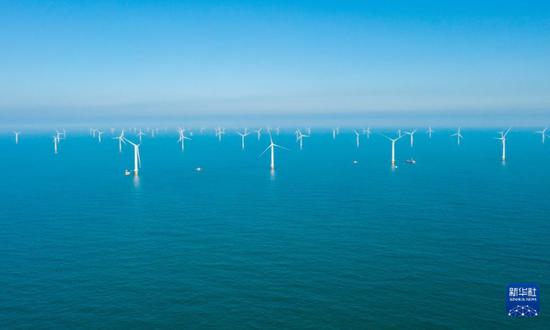 China's largest unsubsidized offshore wind power project is now fully operational in Shanwei, South China's Guangdong Province on Tuesday after the electricity generated from the last of the 128 wind turbines was connected to the grid, according to China General Nuclear Power Corp (CGN).

The full operation of the 900,000-kilowatt (kW) offshore wind power project also means the construction of the offshore wind farm in the shallow waters some 25 kilometers off Shanwei has been completed, bringing the total generation capacity of the project to 1.4 million kW, the company said in a press release sent to the Global Times on Tuesday.

The renewable energy production base can supply 4.5 billion kilowatt hours of green electricity a year to Guangdong, an economic powerhouse. This will slash traditional energy use by 1.45 million tons of standard coal and cut carbon dioxide emission by 3.5 million tons, according to the press release.

China's wind energy sector has been developing rapidly in recent years, with breakthroughs in the research and manufacturing of high-end equipment in the sector.

In the first three quarters of 2022, the power generation of the country's renewable green energy sector reached 1.94 trillion kWh, with wind power generation standing at 544.1 billion kWh, up 15.9 percent year-on-year, an official with National Energy Administration said in November.