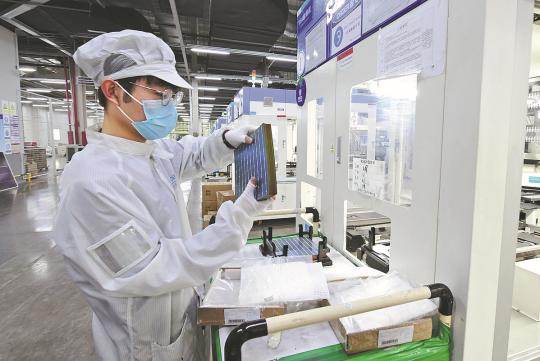 An employee works on the production line of photovoltaic products at a company in Yiwu, Zhejiang province. (SHI BUFA/FOR CHINA DAILY)

China's photovoltaic or PV industry is on a fast track of development with new installations and exports hitting record highs, and will stay resilient amid mounting challenges from fiercer global competition and trade uncertainties, experts said.

They made the remarks after reviewing a statement by the US Department of Commerce on Friday that some Chinese solar manufacturers had circumvented tariffs by assembling equipment in Southeast Asia before shipping them to the United States.

Some of the companies concerned, such as BYD Hong Kong, Trina and Vina Solar, said it was a preliminary determination by the US Department of Commerce, and had no impact on them so far. Media reports said the companies assured they will follow up on the subsequent processes.

The US Department of Commerce said on Friday it will conduct further verifications in the coming months and the final determination is currently scheduled for May 1, by which time the companies concerned will get the opportunity to comment on the findings.

Jiang Yali, a solar analyst at energy research provider BloombergNEF, said the anti-circumvention tariffs have a two-year exemption period, so the short-term impact is not significant.

"In fact, US orders of anti-dumping duty and countervailing duty on solar cells and modules will have a bigger influence on their companies and projects, as the inability to expand production capacity enough within a short time to meet domestic demand will only increase the cost of equipment purchases for local projects," she said.

The total export volume of China's PV products (silicon wafers, cells, modules) was about $44.03 billion during this period, a record high and year-on-year increase of 90.3 percent, the CPIA said.

The International Energy Agency released a report in July that said China's share today in all the manufacturing stages of solar panels exceeds 80 percent, and the country is home to the world's top 10 suppliers of solar PV manufacturing equipment.

The IEA also said that China has been instrumental in bringing down costs worldwide for solar PV, with multiple benefits for clean energy transitions.

Wang Bohua, the honorary secretary-general of the CPIA, said many domestic PV manufacturers are now ramping up output to tap the burgeoning market, which may intensify competition and lead to overcapacity.

In October, the European Commission endorsed a new Solar Photovoltaic Industry Alliance, with the aim of scaling up manufacturing technologies. The commission said on its website the alliance will help the European Union reach over 320 GW of newly installed PV capacity by 2025, and almost 600 GW by 2030.

The US is also supporting its PV development through incentives. In August, the US introduced the Inflation Reduction Act of 2022, which stipulates $30 billion in production tax credits to accelerate domestic manufacturing of solar panels, wind turbines, batteries and processing of critical minerals.