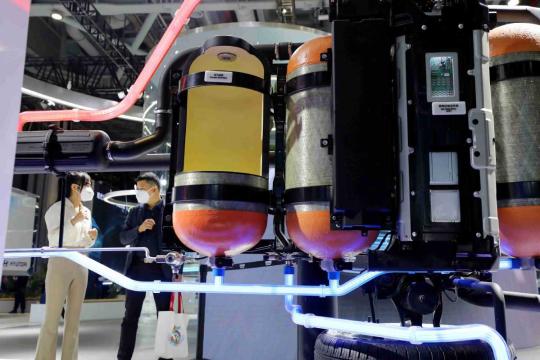 China's development of the hydrogen energy industry is on a fast track driven by policy support and market demand, with innovative technologies, new applications and mechanisms constantly emerging, experts said.

More efforts are expected to accelerate technological breakthroughs, expand the application of hydrogen fuel cells in areas such as rail transit and power supply to achieve new green and low-carbon growth, accelerate the development of hydrogen made from green sources and step up global cooperation in the sector, they said.

The remarks were made at the recent China Hydrogen Industry Conference held both online and offline in Beijing and Foshan, Guangdong province.

Hydrogen energy involves the use of hydrogen and hydrogen-containing compounds to generate clean energy.

According to the National Development and Reform Commission, at present, China is the world's largest hydrogen-producing country, with annual hydrogen production of about 33 million metric tons. The country now has over 300 hydrogen companies whose annual revenue surpasses 20 million yuan ($2.8 million).

Shen Zhulin, an official with the NDRC, said: "With the acceleration of the scientific and technological revolution and industrial transformation, hydrogen energy has gradually become a new focus of global strategic competition, an important direction for countries to cultivate emerging industries, and an important way to promote the green and low-carbon transformation of energy production and consumption under the consensus of countries to actively cope with climate change."

Zhang Xiaoqiang, executive vice-chairman of the China Center for International Economic Exchanges, said the development of hydrogen energy is of great significance to help China peak carbon emissions by 2030 and reach carbon neutrality by 2060.

In March, the NDRC and the National Energy Administration co-released a mid and long-term development plan for China's hydrogen energy industry, which stated that the industry is an integral part of China's energy system and it will promote the low-carbon transition of areas like transportation, industry and other energy-intensive sectors.

Xiang Haiping, chief engineer of the NEA, said that China attaches great importance to the development of the hydrogen energy industry. Up to now, more than 20 provinces, autonomous regions and municipalities have issued documents on hydrogen energy planning and guidance.