Energy security in the time of market turmoil 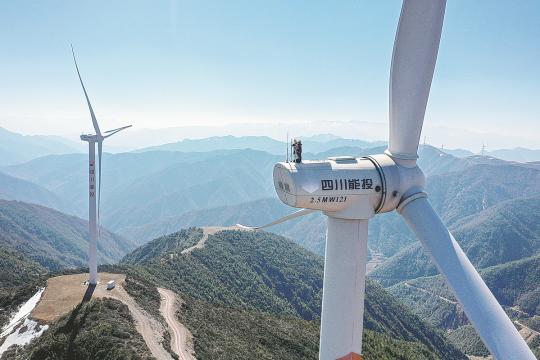 Employees of Sichuan Energy Investment Co Ltd carry out maintenance work on a turbine at a wind farm in Liangshan Yi autonomous prefecture, Sichuan province, in March. (Photo by He Haiyang/for China Daily)

Yu Cong, 28, a Beijing-based accountant, found it improbable that the energy crisis in Europe should spark heated debates among his older relatives in his home village, a less-developed area in Northwest China's Shaanxi province, a coal hub.

"Most of the villagers are retirees and track the Russia-Ukraine conflict news on TV. They are aware the energy crisis has affected local residents' daily lives in Europe. Now, they fear it could someday affect their own lives, given the short-term oil price spike earlier this year. But not everyone thinks that way. This results in debates," Yu said.

Inevitably, such debates have as talking points the turmoil in global energy trade and the need to ensure energy security in China amid the transition to a greener economy.

Both villagers and experts agree more efforts are needed to stabilize coal supply, diversify oil and gas import sources and increase energy reserves. Some even say it is time to speed up the establishment of a yuan-denominated energy trading system in order to ensure adequate power supply.

Countries including Germany agreed to reactivate coal power plants to increase electricity production, in order to compensate for declining gas imports due to the Russia-Ukraine conflict. Belgium reportedly is reconsidering an exit from nuclear power, while countries like Italy and the United Kingdom are accelerating new energy efforts.

Jing Chunmei, deputy director of scientific research and information at the China Center for International Economic Exchanges, said the Russia-Ukraine conflict will reshape the global energy market. While European countries are forced to seek alternatives to significantly reduce their dependence on Russian oil and gas, Russia also needs to develop a larger energy consumption market in developing economies.

"European countries will increase resource purchases from the Middle East, North America, Africa and Australia. The bidding for oil and gas resources in the world will become more intense," Jing said.

"Facing the significant impact that the Russia-Ukraine conflict will have on the global energy system, it is better that China, as a country with large energy demand, adjusts its energy strategies."

"Among the strategies, diversifying oil and gas import sources is particularly important. Efforts should be made to expand gas transmission capacity of cross-border pipelines, and further deepen cooperation in the gas sector between China and neighboring countries such as Turkmenistan, Uzbekistan and Russia." 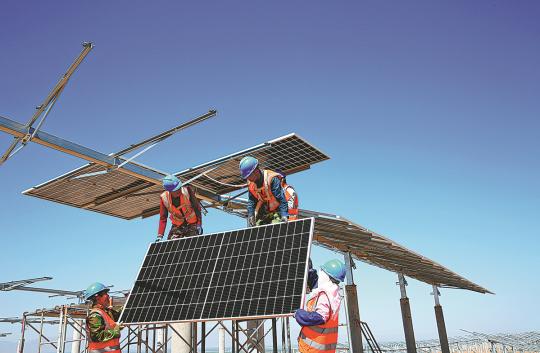 China has been stepping up efforts to deepen global cooperation in the gas sector. State-owned China National Petroleum Corp has been promoting its Central Asia-China Gas Pipeline project that originates in Gedaim, a city on the Turkmenistan-Uzbekistan border, and runs through central Uzbekistan and southern Kazakhstan before reaching Horgos in China's Xinjiang Uygur autonomous region.

China also cooperated with Russia to build a gas pipeline, which will transit through Mongolia.

"It's necessary to accelerate the construction of Line D, start negotiation on the construction of China-Mongolia-Russia natural gas pipeline, continue to consolidate oil and gas cooperation with countries in the Middle East such as Saudi Arabia, the United Arab Emirates and Iran, and focus on strengthening energy cooperation with Argentina and other major oil and gas suppliers," Jing said.

To avoid the risk of exchange rate fluctuations, it is necessary to speed up the establishment of an RMB-denominated international energy trading system covering oil, gas and new energies, she said.

Agreed Bai Ming, deputy director of international market research at the Chinese Academy of International Trade and Economic Cooperation. "China-Russia energy cooperation now has a 'window' of opportunity as the energy industries in both China and Russia are highly complementary. China has a big market in need of energy resources and Russia has abundant energy resources," he said.

"China should also actively seek cooperation with Angola and Venezuela, and sign long-term cooperation contracts with them for stable and diversified sources of energy imports."

Bai also said European countries are also likely to turn to the United States for shale oil imports, as the commodity can be a substitute for crude oil, which may offer an opportunity of further development of the industry in the US.

"Global energy trade is likely to see a big change and China should actively seize opportunities of development and avoid risks to energy security," he said.

CNPC employees check equipment at an oil well in Qingyang, Gansu province, in May. [Photo/Xinhua]

Lin Boqiang, head of the China Institute for Studies in Energy Policy at Xiamen University, said the Russia-Ukraine conflict is likely to lead to a restructuring of the global energy trading system. Market entities may seek new partners and build the infrastructure necessary to meet their energy needs. If such a scenario unfolds, energy prices may remain high for the next two to four years.

In the first half of this year, prices of oil and coal spiked. The benchmark West Texas Intermediate crude oil prices reached as high as $123.7 per barrel while Brent hit $127.98 per barrel in March.

According to a recent report from the China Electricity Council, the price level of thermal coal is still elevated, and coal-fired power companies lost big money in the first half.

The report said since the beginning of this year, the price of thermal coal purchased by power companies has continued to be higher than the upper limit of the benchmark price. The unit price of standard coal purchased by large power generation groups has increased by 34.5 percent year-on-year in the first half. Coal-fired power companies are estimated to have paid an additional 200 billion yuan ($29.69 billion) for raw materials in the first half.

Hao Yingjie, general director of the CEC, said coal mines and ports in China have low coal inventories currently, and the high prices of raw materials make it hard for coal-fired power generators to make a profit. Hao said there are challenges in ensuring adequate supplies of energy like thermal coal during peak periods in summer and winter and the demand-supply equation will be tight.

"It's essential to ensure energy supplies are adequate. Continuing to increase the total coal supply is an important way to achieve the goal. Meanwhile, it is also important to sort out difficulties that coal companies may face during the government's assessment and approval processes of coal production capacity, and help coal companies to complete those procedures more efficiently," Hao said.

The goal now is to quickly approve an addition of 300 million metric tons in coal production capacity this year, and ensure daily output of 12.6 million tons, Hao said.

"It's also important to promote the signing of mid- and long-term contracts between coal producers and users as they can help manage a balance between supply and demand, and guarantee stable coal prices. Mechanisms to stabilize coal prices and smooth logistics are also needed."

Promoting new energy transition is also an important means to increase energy self-sufficiency and ensure energy security, experts said. It is necessary to promote the decarbonization campaign in an orderly and prudent manner to avoid energy shortages.

"The challenge in China's green transition is how to quickly find a substitute for oil in the country's current energy structure. One way is to increase reserves and raise investment in upstream industries. Another way is to develop new energies such as hydrogen, power storage systems like pumped-storage hydroelectricity and lithium-ion batteries."

A recent CEC report showed China is continuing with its green energy transition. In the first half of this year, investment in non-fossil fuel power generation accounted for 84.7 percent of the country's total, which stood at 215.8 billion yuan, up 14 percent year-on-year.